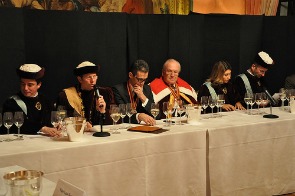 Eight oenology clubs from the best American Universities competed last Wednesday January 25, 2012, at the Consulate General of France, during the U.S. phase of the 20 sur vin contest, organized by the Commanderie du Bontemps de Médoc, des Graves, de Sauternes et de Barsac. The two best teams chosen will continue to the finals with the hopes of ranking high and visiting the largest vineyards in the region of Bordeaux.

Under the gracious authority of the Grand Maître Emmanuel Cruse and the members of the jury, the candidates began with a theoretical test, and proceeded with three series of blind tastings. Perspicacity, fine judgment and a keen sense for distinguishing flavors enabled the Universities of Chicago and Wharton to win the contest this year. Their representatives will fly to Bordeaux next June for the Grande Finale at the domain of Château Lafitte. 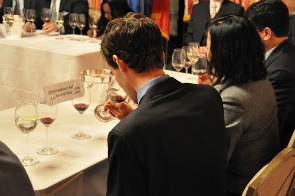 Created in 2002, 20 sur vin was initially designated for French and British competitors, before it became an international event in 2011, open to Asian, Central European and American students as well.

Wharton Business School of the University of Pennsylvania

The pictures of the event