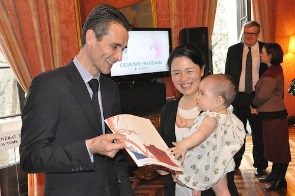 During his speech, Mr. Lalliot declared the importance of this ceremony for those whose choice it was to become French, as well as for the French Nation itself to receive them as part of her. A symbolic moment with a warm touch.

“This ceremony is also an important moment for France. Many men and women before you, from a wide variety of origins, have chosen to become French and have enriched our history with their culture and their strengths. They have loved and served France.”