The 4th competition for the French-American Entrepreneurship Award is now open for candidacies – until December 31st, 2011! 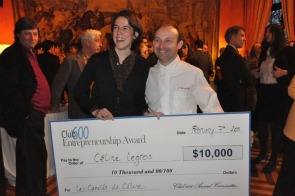 Created in 2008 by Club 600 with the objective of assisting young French entrepreneurs to succeed in the United States, the competition is now jointly organized by the Club 600 and the French-American Chamber of Commerce (FACC).

The winner will enjoy a year-long advice on strategic, legislative, accounting and financial issues. The advice will be provided by a team comprised of Club 600 and FACC members with the necessary experience in the relevant business domain. The person will also receive $10,000 as a contribution to financing the project, as well as a year’s membership to Club 600 and the FACC which will enable him or her to gain access to the members’ network.

In order to participate, entrepreneurial projects must be in their pre-launching or launching phase, have the objective of private commercial development on the U.S. market, and be managed by a young French entrepreneur not over the age of 35. Applications should be submitted online before December 31, 2011, on the French-American Entrepreneurship Award site.

Since its foundation, the French-American Entrepreneurship Award has awarded three entrepreneurial projects: Les Canelés de Céline by Céline Legros in 2010, Hypios by Stéphane Chong and Klaus Speidel in 2009, and Fruition Sciences by Sébastien Payen and Thibaut Scholash in 2008.

Three finalists will be announced on January 15, 2012, and on February 5th they will present their projects in front of the committee. The jury will be composed of Club 600 and FACC-NY members competent in a wide variety of business sectors: Martin Bischoff (Labrador USA), Anne Busquet (AMB Advisors), Emmanuel Cargill (Pernod-Ricard USA), Diana Castelnuovo-Tedesco (Fraiche PR), Yves Coleon (Transmark Partners), Stephan Thollot (Ernst and Young LLP).

The winner of the French-American Entrepreneurship Award 2011 will be announced on February 6, 2012.