Conference 934: 50 Years Later, Telling the Story of May 68 in France and the United States [fr]

On May 8th 2018, the French Consul in New York will organize a new 934 Conference. “Forbidden to Forbid: How May 68 Changed both Sides of the Atlantic.” Our speakers will analyze the connections and echoes between the social movements that took place on both sides of the Atlantic in 1968. 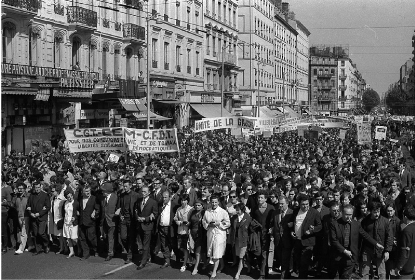 May 68 is a pivotal moment in history that has been written about copiously. The late 1960s was a time when there were unprecedented cultural and political changes. There was a tremendous lust for freedom, which became the symbol of a generation, and that did not just grip France. In the United States, the end of this decade was marked by events that ranged from the Civil Rights Movement and the assassination of Martin Luther King on April 4 th 1968, to the anti-Vietnam war demonstrations that began in 1967. How can we connect and compare the events of Mai 1968 in France with the great social movements that spread through the United States?

Le French Consul in New York suggests that we take a comparative perspective in thinking about this period of contestation.

For this event, we will have the pleasure of welcoming:

This exchange will be moderated by Clay Risen, editor of the "opinion" page at the New York Times.