"France must be the gateway to the European market”

French President François Hollande toured Fedex’s European hub at Paris-Charles de Gaulle airport on Tuesday, October 19, as the new phase of Fedex’s European development was being unveiled. He pointed out France’s role after Brexit: attract investors and be the gateway to the European market. 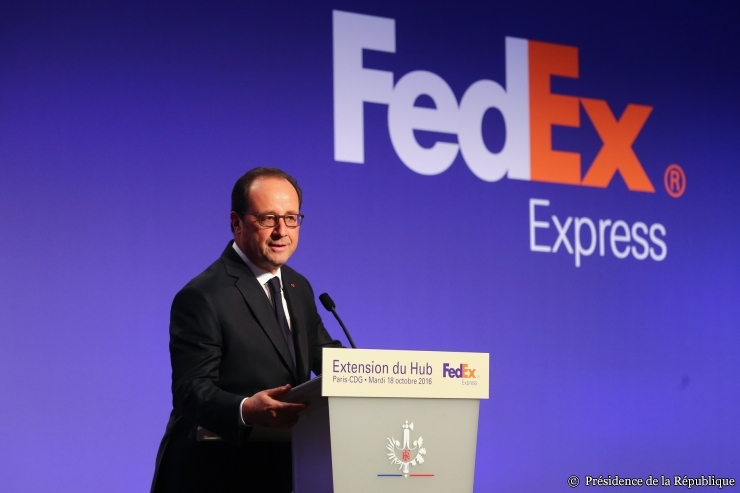 The President of the French Republic toured Fedex’s European hub at Paris-Charles de Gaulle airport on Tuesday, October 19, as the new phase of Fedex’s European development was being unveiled. He was accompanied by Ms. Martine PINVILLE, Secretary of State for the Minister of the Economy, in charge of Trade, Artisans, Consumer issues and the Social economy, and Mr. Christophe SIRUGUE, Secretary of State in charge of Manufacturing.

In the presence of Jane D. Hartley, United States Ambassador to France, the President of the Republic expressed his gratitude to the government and corporate partneirs who allow France to attract investors, while pointing out that some work remained to be done:

The President of the Republic observed that France attracts big companies such as Fedex, in turn attracting increasingly large investments from all over the world.

Indeed, France would like the United States to think of her not only as an ally or a partner, but as a loyal friend.

In the current context of Brexit, the role of France is to provide access to European markets:

To do so, it is important to attract foreign investors, including executives who have moved back to France after working abroad, and to try to find the best ways possible to make investments secure:

The President of the Republic pointed out that the extension of the Fedex hub at Charles de Gaulle airport was sending a positive signal, at a time when Paris is competing against cities like Los Angeles to host the Olympic Games in 2024.

Read the entirety of the President of the French Republic’s speech Investor ? Find out how to invest in France