{} {} This month, we continue our tour of Alsace, with a traditional recipe called for Baeckeofe.

Baeckeofe is an Alsatian word that means “baker’s oven.” It is a traditional dish made with meat and marinated vegetables. Housewives would prepare the dish and place it in the baker’s oven before going out to the fields. The baker’s oven would have been the only oven in the village at those times. 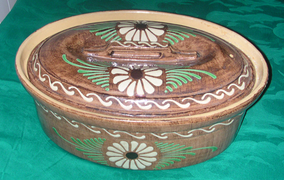 This dish is from the cities of the lower Rhine, which includes the city of Strasbourg. The Alsatian writer Jean Egen (1920-1995) wrote in his 1980 novel Les Tilleuls de Lautenbach: “When it was time to prepare the meal that would follow his grandmother’s funeral, there was some hesitation until a baeckeofe was chosen because it was a dish from the lower Rhine.” In the Alsatian countryside, bakers were few and far between, since everyone generally made their own bread once every fifteen days or once every three weeks (which would also provide the occasion to make the traditional flammeckuche). Meat was a luxury for peasants, who ate potatoes with curd (bibeleskäs) during the week, and on Sunday, would add eggs to the white sauce (kachelmües).

Today, this dish is one of the most well-known Alsatian dishes, along with flammeckuche and sauerkraut. 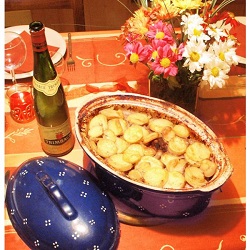 1. Cut off the root end and the dark green portion of the leek and discard. Slice the white park of the leek cross-wise into rounds. Wash to remove grit and strain dry. Set aside.

2. Cut the celery stalk into a small dice. Set aside.

3. Stick the clove of garlic into 1 peeled onion. Peel and dice the second onion. Set aside.

5. In a large dish (preferably not metal), pour the entire bottle of wine. Add the chopped leeks, diced celery and onions, whole onion, cubed meats, garlic and the bouquet garni into the dish. Season with ½ tbs salt and pepper to taste.

6. Cover the dish with film in the refrigerator to marinate overnight.

8. Clean and peel the potatoes, and slice into rounds with ¼-inch thickness.

10. Grease the inside of the baeckeofe casserole with the goose fat or butter. Place a layer of sliced potatoes in the bottom of the casserole. Then add a layer of meat, followed by a layer of diced onions. Begin again with the potatoes, etc. and finish with a layer of potatoes.

11. Strain the marinade and pour the liquid into the casserole. The liquid should reach the top-most level of potatoes; if not, add water.

12. Cover the casserole and bake in the oven for 1½ hours.

14. Serve with a simple green salad.

If you have any questions or comments, send me an email at chef.consulat@icloud.com {} {} Chef de cuisine

{} For more amazing recipes, you can read our "Recipe of the month" section