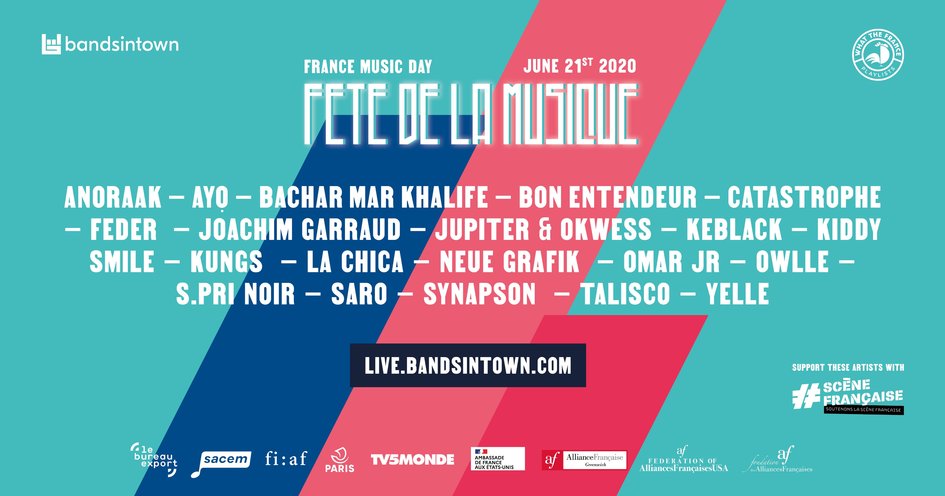 It’s a new, digital version of the music-for-all initiative that originated in France, held every year in squares and streets around the world at Midsummer. All donations will go to the artists participating, as well as to charities that support social justice, including the NAACP.

“Fête de la Musique / Make Music Day focuses on bringing people together to celebrate music and artists, which is at the core of Bandsintown’s mission,” explains Managing Partner Fabrice Sergent. “We need initiatives that unite people, and support equality, diversity and love for one another, which is what music and Make Music Day are all about. This year, we were not ready to give that up, hence the decision to take the festivities online.“

Fête de la Musique began in France, but has taken root in communities across the world. On the summer solstice in 1982, musicians took to the streets of Paris to make music for the first Fête de la Musique. The event, often called Make Music Day, became a global tradition over the years, eventually spreading to 120 countries, where performers of a range of levels and styles turn public spaces into music venues. The democratic, joyful spirit of coming together to make or savor live music remains unstoppable, even amid unprecedented challenges to in-person live music performances.

“When Bandsintown and Sacem asked us to collaborate on this event, we instantly thought that it could be a unique opportunity for What the France to play to its core mission, which is to highlight France’s musical diversity and creativity for an international audience,” explains Marc Thonon, CEO of France’s Le Bureau Export. “And we believe this line up matches perfectly, with a great range of French artists showing the world their talents.”

"Fête de la Musique is an important moment in the French cultural calendar. We’re glad to collaborate with Bandsintown today to make it accessible to all,” notes Gaëtan Bruell, Cultural Counselor of the French Embassy in the US. “While highlighting the diversity and vitality of the French musical scene, it also proves that our current times are fertile ground for digital innovation in the cultural world. This initiative gives people a great opportunity to unite around music and donate to social justice organizations, which sends a strong message of solidarity to audiences around the world."

Bandsintown celebrates artists and helps them grow their careers. As the most trusted source of concert and live stream recommendations, Bandsintown helps fans discover artists, their music and attend more shows, in real life or online. With a reach of 200M Monthly Active fans globally, over 55M registered concert goers and 530k artists registered to the platform, Bandsintown is a world-leading marketing solution for brands to engage with music enthusiasts at scale. Visit the Bandsintown website at www.bandsintown.com.

About Le Bureau Export & What The France