Home > The Consulate General of France > Decorations > Ceremony for the 70th Anniversary of the Normandy Landings at Liberty (...)

On June 6, 2014, the President of the French Republic welcomed the leaders of 18 nations, among whom President Barack Obama, for the ceremonies honoring the 70th anniversary of the D-Day landings in Normandy.

The French Embassy in the United States, the Consulate General of France in New York and the association The French Will Never Forget organized, on the morning of that same day, a commemoration ceremony that was held at the foot of the Statue of Liberty, symbol of the French-American friendship.

On the morning of June 6, the French frigate La Fayette anchored in New York bay, in front of the Statue of Liberty. At the same time, two large French and American flags were unfurled onto the lawns of Liberty Island, by students from French schools in New York and New Jersey, in the presence of World War II veterans.

A million rose petals were then dropped onto the Statue of Liberty by three helicopters.

Finally, during the ceremony that followed, Mr. Maurice Greenberg, a World War II veteran, received the insignia of the Legion of Honor from Mr. Bertrand Lortholary, Consul General of France in New York. 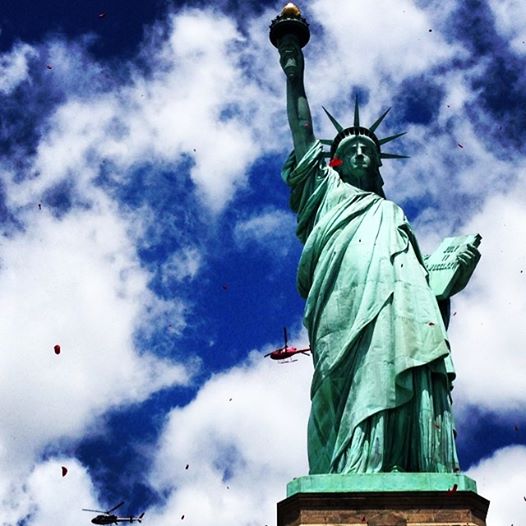