The Consul General of France in New York, Mr Bertrand Lortholary, went to the City Hall of Newark, NJ, on May 8th, 2013, to attend a ceremony honoring Willie Wilkins, a World War II veteran from South Ward of Newark, NJ.

Mr Wilkins served in a US Army Quartermaster Graves Registration unit which was part of the Provence region invasion in August 1944. During the in-land advance of Allied forces, he lost his dogtags near the City of Istres. Nearly 70 years after the events occured, the dogtags were finally shipped back to New Jersey, thanks to the joint efforts of two French citizens, Mr Philippe Clerbout and Anne-Marie Crespo and of Mr Wilkins’ daughter, Carol.

As the 8th of May officially celebrates the anniversary of the victory of Allied forces on Nazi Germany, the Mayor’s Office of the City of Newark and the G.I. Go Fund (a local nonprofit serving veterans) cosponsored a ceremony in honor of Mr Wilkins. As Mayor of Newark Cory Booker, G.I. Go’ Fund’s CEO Jack Fanous and Consul General Bertrand Lortholary were remembering the outstanding efforts of US forces in liberating France, they surprised Mr Wilkins with the return of his lost dogtags. 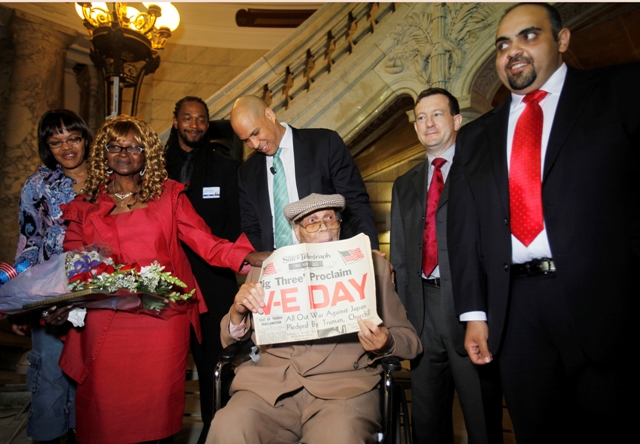 Pictures from the reception