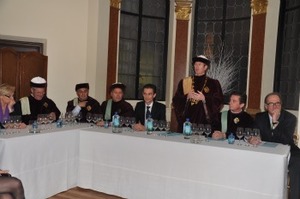 The Consulate General of France in New York hosted on Saturday, January 29th the preliminaries of the "Concours 20 sur vin", which celebrates its tenth birthday in 2011. The event was organized by the Commanderie du Bontemps et de Médoc. 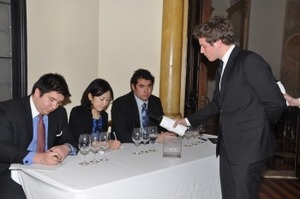 To see the pictures of the evening, please visit the Flickr page of the Consulate. 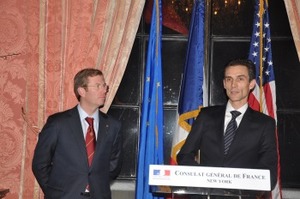 Speech by the Consul General of France in New York, Philippe Lalliot:

It’s with great pleasure that I welcome you to the Consulate tonight for this round of the “20/20” competition which is organized by the Commanderie du Bontemps, de Médoc, des Graves, du Sauternes et de Barsac.

I will not hide it. I love wine of this exceptional quality and I love it for the pleasure that it gives of course but also for the image that it reflects of France. In this vein, we welcome to the Consulate each September, the fall dinner of the Commanderie de Bordeaux. Last October, in this same room we organized a tasting of the Grands Crus classés 1855. I am thus delighted to open the 2011 season with you.

I would like to thank and congratulate Emmanuel Cruse who came up with the idea of using the Consulate to welcome this round of this international wine tasting competition whose reputation has not ceased to grow since its creation in 2002.

An homage first of all to the Commanderie. Soon to be 62 years old, the Commanderie is at the same time the guardian and the ambassador of the most prestigious chateaux and vineyards of the left bank of the Gironde. The Commanderie is the heir of the traditions of France and Bordeaux that date many centuries but is also an essential economic actor which promotes our best wines and through them France, its know how, its savoir vivre, its culture and its heritage throughout the world.

The angle adopted by the organizers of the 20/20 competition reflects an attitude which is made of a great openness of spirit and a true curiosity for the world. And this is exactly the way we want to see and grasp the future at the Consulate.

Destined in the beginning for oenology clubs at elite French schools, this competition first enlarged itself by adding to its ranks two prestigious British universities, Oxford and Cambridge.

This year, you continue your momentum in incorporating universities from other continents, both North America and Asia. Represented in the competition are now MIT, Columbia, Harvard, the University of Hong Kong and Nanyang Technological University of Singapore to cite a few.

We are thus lucky and honored to have with us tonight the brightest students for the most refined wines! The competition has been a tough one this afternoon but the reward will be worth it: the winners will meet this June at the prestigious Château Lafitte-Rothschild.