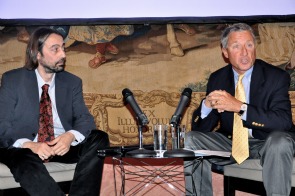 Adolfo García-Sastre, Professor in the Department of Microbiology and in the Division of Infectious Diseases at the Mount Sinai School of Medicine in New York, Co-Director of the Global Health and Emerging Pathogens Institute ; and, Bruno Chomel, Professor for Population Health and Reproduction at the UC Davis School of Veterinary Medicine, Co-Editor-in-Chief of Veterinary Research.

AIDS, SARS, H1N1, Influenza A, Mad Cow Disease, Bird Flu, E-Coli… New viruses have repeatedly been identified recently. Because of globalization, diseases are able to spread much faster throughout population clusters. At the same time, medical research is making progress, and governments are designing new epidemic surveillance methods to face this threat. Will the world be able to avoid a new disaster, like the Spanish Flu which killed 30 million people in 1918? Where do the major risks come from? Beyond the catastrophist, yet fictional approach of the film Contagion, are scientists and governments truly prepared for a pandemic outbreak?

Listen to the conference

Extract of the conference 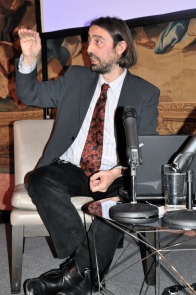 Dr. García-Sastre is Professor in the Department of Microbiology and Co-Director of the Emerging Pathogens Institute at Mount Sinai School of Medicine in New York. He is also Principal Investigator for the Center for Research on Influenza Pathogenesis (CRIP). He is the leader of the basic research component on Viral Therapeutics and Pathogenesis of the North East Biodefense Center proposal, which involves the collaboration of more than 20 academic institutions in New York, Connecticut and New Jersey. For the past 15 years, his research interest has been focused on the molecular biology of influenza viruses and several other negative strand RNA viruses. His studies led to the generation of attenuated influenza viruses that might prove to be optimal live vaccines against influenza. His research has resulted in more than 100 publications and reviews. 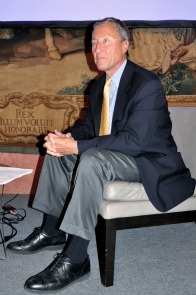 Pr. Chomel is a Professor for Population Health and Reproduction at the UC Davis School of Veterinary Medicine. He is an expert on infectious disease zoonoses and public health, wildlife epidemiology and tropical medicine. He teaches epidemiology, zoonoses and veterinary public health, and has been a guest speaker to numerous organizations nationally and internationally. Mr. Chomel is in charge of plaque surveillance in wildlife and domestic animals for the State of California Zoonoses, and a specialist to the Californian Department of Health Services. He is also associated to the World Health Organization Collaborating Center for New and Emerging Zoonoses. He has been the co-Editor-in-Chief of Veterinary Research since 2002.