Conferences@934: Iran and the Nuclear Threat 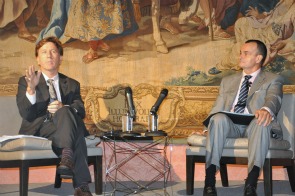 His Excellency Gérard Araud, Ambassador, Permanent Representative of France to the UN in New York and Colum Lynch, Staff Writer from The Washington Post

Since Iran’s clandestine nuclear program came to light nine years ago, the international nuclear non-proliferation regime is faced with a major challenge. Iran’s persistent failure to comply with its international obligations, its refusal to cooperate with the International Atomic Energy Agency (IAEA), and its pursuit of a policy of fait accompli, are of major concern for the international community. The recent announcement by the Iranian government – transfer of centrifuges to its facility near Qom, production of uranium enriched up to 20% - a level coming closer to the military threshold– are very alarming, whereas the IAEA remains unable to confirm that all nuclear material in Iran are dedicated exclusively to peaceful activities and expresses its increasing concern about the possible military dimension of Iran’s nuclear programme.

In this constantly disturbing context, the Permanent Representative of France to the UN, Ambassador Gérard Araud, and the journalist Colum Lynch of the Washington Post, will speak about Iran’s nuclear threat, and the means the international community may use to face it.

Listening to the conference

Extract of the conference: 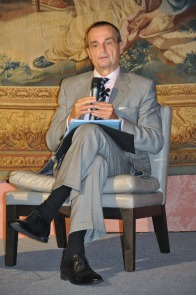 Gérard Araud has been the Permanent Representative of France to the United Nations in New York since September 2009. He studied at the Ecole Polytechnique, the Institut d’Etudes Politiques in Paris and the Ecole Nationale d’Administration, before entering the diplomatic corps at the Ministry of Foreign and European Affairs. Notable positions he had held were that of Counselor in Washington and member of the French delegation to NATO in Brussels, before he was appointed Ambassador in Tel Aviv. He has also been the Director General for Strategic Affairs, Security and Disarmament at the Ministry of Foreign and European Affairs. In 2004, Gérard Araud received the Knight medal of the French Legion of Honor. 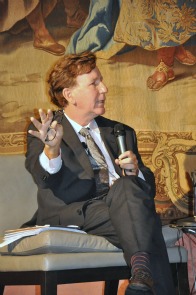 Colum Lynch covers the United Nations for the Washington Post. Lynch has been involved in the paper’s diplomatic coverage of a broad range of crises, including conflicts in Afghanistan, Iraq, Lebanon, Sudan, and Somalia, and the nuclear standoffs with Iran and North Korea. He has played a key part in the Post’s diplomatic reporting on the Iraq war, the International Criminal Court, the spread of weapons of mass destruction, and U.S. counterterrorism strategy. He also writes Foreign Policy Magazine’s Turtle Bay blog, which won the 2011 National Magazine Award for best news reporting in digital media.

The pictures of the event