Conferences@934: Living and Working in Space 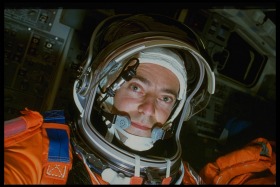 An astronaut can start out as a professional in any one of several areas. Some have been scientists, others have been engineers, and still others have been pilots in other professional settings. During their space missions, they’re required to be operators...
They operate often complex scientific instruments in need fine adjustments in direction, calibration and other parameters. They also need to be able to pilot and repair damaged satellites. The main challenge in life aboard a space vehicle is, first and foremost, organization. It’s “camping,” so to speak, while weightless, which includes taking care of hundreds of tasks per day, like sleeping, eating, washing up, relaxing, etc.

There is indeed no better time to have such a conference as we all wait for the launch of Endeavour and the beginning of its mission to the International Space Station. On a more general note, we all recall Neil Armstrong’s first step on the moon. We have also watched Apollo 13 and The Right Stuff. So many moments, images and memories, which made up a legend and a real fascination for space exploration. This legend was formed through successes, difficulties, controversies as well – especially on the usefulness of man-held spaceflights, – and, finally, through announcements, even very recent ones, such as President Obama’s to NASA, stating the objective of putting a man in orbit around Mars by 2030.

This tour is organized by the Délégation générale de l’Alliance Française in the USA in partnership with Novespace and the European Space Agency.