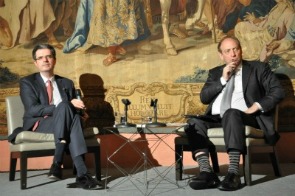 François Delattre, Ambassador of France to the United States 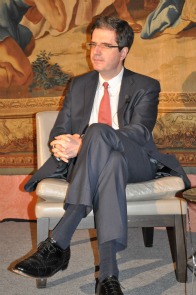 - François Delattre was appointed Ambassador of France to the United States in February 2011 after serving as Ambassador of France to Canada (2008-2011), Consul General in New York (2004-2008) and Press and Communications Director at the French Embassy in Washington, D.C. (1998-2002). A member of President Jacques Chirac’s foreign policy team (1995-1998), François Delattre was responsible for European and trans-Atlantic defense and security matters and managing the Bosnian crisis. He also served as Deputy Director of the French Foreign Minister’s Office (2002-2004) and was a member of Foreign Minister Alain Juppé’s cabinet (1993-1995), following two years with the Strategic, Security and Disarmament Department of the French Foreign Ministry (1991-1993). François Delattre was posted in Bonn at the French Embassy in Germany (1989-1991), where he was in charge of matters pertaining to the economic impact of Germany’s unification and the environment. 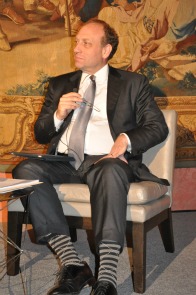 - Michael Oreskes became senior managing editor for the Associated Press in early 2009. Prior to this, as managing editor for U.S. news, he oversaw all U.S. news from the Associated Press coming in from bureaus across the 50 states, as well as the Washington office, the news service’s largest bureau. He also supervised the AP’s national feature, beat, and investigative reporters. Prior to coming to the AP, he served as executive editor of the International Herald Tribune since 2005. Previously, he was deputy managing editor of the New York Times. During this period, he won three Emmy awards and a DuPont award for documentary television. From 1997 to 2001, Oreskes was Washington bureau chief for the Times, and previously served as national political correspondent, metropolitan editor, and city editor. He started with the Times in 1981 as a metropolitan correspondent. Before that Oreskes worked for the Daily News in New York City. He is a graduate of City College of New York. He is co author of The Genius of America, How the Constitution Saved Our Country and Why It Can Again, published in French by Odile Jacob as Le Génie de l’Amérique.