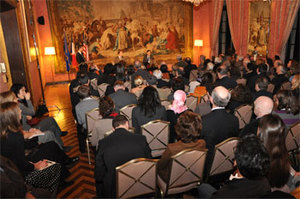 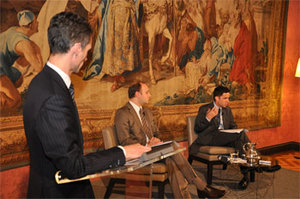 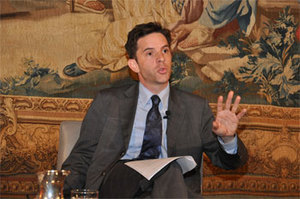 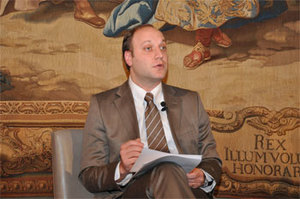 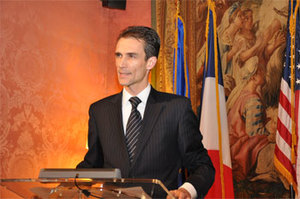 I would like to welcome you all tonight to the Consulate General of France. For those of you who participated in the conferences last year, you know that we have launched a series of conferences at the Consulate.

This series is baptised Conferences@934. The conferences bring together every month, two public figures, one French and the other American, who confront their analyses on subjects related to international relations and the Franco-American relationship.

Thus, we will have in the next few months a conference in February on the consequences of the economic crisis, in March a conference on the fight against pandemics with the Nobel Prize Laureate for medicine, François Barré-Sinoussi, in April a conference on micro credit with Jacques Attali and so forth.

You will be informed of the date of these conferences and the figures who will participate via the site of the Consulate of France, our Facebook page and our Twitter page which I invite you to consult regularly. Moreover, we are open to your suggestions in defining the program of this Conference series and to your feedback after each conference.

The subject today is “Islam and National Identity : A discussion on the French Model of Integration.” You certainly know that a debate on this theme has been launched in France. The President of the Republic, Nicolas Sarkozy, himself spoke on this subject, notably in a speech given on November 12, 2009.

He declared, for example, that “From century to century, France has not ceased to mix and thus to transform and to enrich itself. France does not consider itself as a juxtaposition of communities or individuals. France is not only a community of interest. To become French is to adhere to a form of civilization and to values”.

This debate on what it is to be French has provoked a lot of controversy, suspicion and critiques. For my part, I have always considered that what is dangerous is not discussion but the refusal of discussion. This debate is necessary and it aught to be conducted with respect for the opinion of others. This is how we intend to proceed tonight and I know I can count on you and on our two guests to do this.

I would like to thank Justin Vaîsse for having accepted to participate in this conference. Justin is a long-time friend. We have known each other for nearly ten years. He is, in my eyes, one of the most brilliant of his generation and his article, together with Jonathan Laurence, on the subjects we discuss this evening are among the most interesting and the most intelligent.

Justin is Senior Fellow in Foreign Policy and the Director of Research of the Brookings Center on the United States and Europe. An adjunct professor at SAIS (Johns Hopkins University), Justin specializes in European affairs, including Islam in France, and in U.S. foreign policy, including its intellectual history.

I would also like to thank Jonathan Laurence, a renowned academic of Boston College. It is likewise a great privilege for me to welcome him tonight. Jonathan Laurence is a Professor of Political Science. A member of the Washington based Brookings Institution as well as the New York based Council on Foreign Relations, he is also a consultant for the State Department.

Before handing over the discussion, I recall, in order for the discussion to be as free as possible, that the opinions expressed here are exclusively those of our individual speakers. They are not the expression of official positions of the French Government.

Our two guests will debate together for thirty minutes before responding to your questions. I propose that we close the meeting around 7:30 pm in order to have refreshments together.

Justin and Jonathan, the floor is yours. 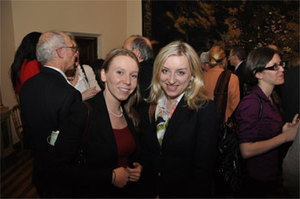 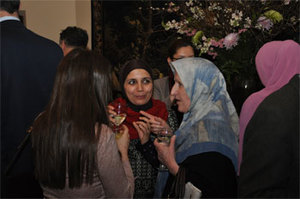