Conference@934: "What Outlook for Financial Regulation in the Context of a Growing Public Debt Burden ?" 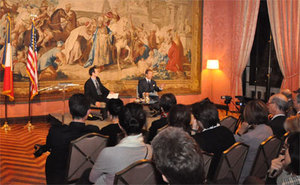 In the conference series "CONFERENCES@934" organized by the French Consulate, Thomas Philippon and Brian Fabbri gave a lecture on March 10th at the Consulate on the theme:

"WHAT OUTLOOK FOR FINANCIAL REGULATION IN THE CONTEXT OF A GROWING PUBLIC DEBT BURDEN?" 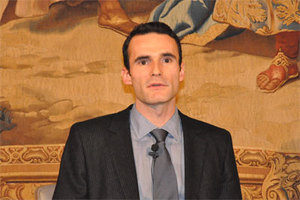 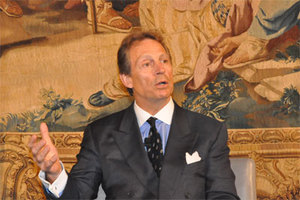 To watch extracts of the conference:


To listen to the whole conference: 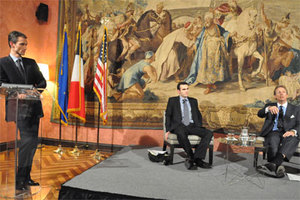 
Welcome to the Consulate for this fourth edition of Conferences@934. I would like to apologize because we had to reschedule this session and thank you for your support.

In the weeks to come there will be more “beau-monde” at the Consulate. On March 16, we will host, the Nobel Prize Winner in Medicine, Francoise Barré-Sinoussi, who will speak to us on the fight against pandemics. If you want to know who will be our next speakers until next July, go to our website. I encourage you also to go to our Facebook page and to check out the photos and video of the conferences.

After Afghanistan and Pakistan, Europe and the Treaty of Lisbon and the French model of Integration, tonight we will speak about a subject that is more economic but just as much of a hot topic, debated with passion on both sides of the Atlantic: financial regulation and the increase of public debts.

This subject has of course an impact on our daily life. By contagion, the initial housing crisis has become a banking, financial and economic crisis and some worry that it will now become a budgetary and fiscal crisis. It has also begun to put in to question the balance of power among the nations.

To enlighten us on this issue, we are lucky to have with us two very talented economists: Thomas Philippon and Brian Fabbri. Their impressive CVs were attached to the conference invitation. Thus, I will be brief in presenting them to you.

Thomas is considered as one of the rising stars in Economics. Laureate, last year of the prestigious Prize for the Best Young French Economist, he has taught Financial Economics at New York University since 2003.

Brian Fabbri, Chief Economist for BNP Paribas North America in New York is famous for his analyses and his forecasts notably on monetary policy. In the United States, and I’m not saying this because he works for a French bank, Brian Fabbri is to financial analysis what Robert Parker is to wine.

We are thus in good hands. Before beginning, I recall, in order for the discussion to be as free as possible, that the opinions expressed here are entirely those of our guest speakers. They are not official positions of the French Government.

Brian then Thomas will speak for about 10 minutes each and will then respond to your questions. I propose that we close the session around 7:45 pm and have a drink together.

Brian , the floor is yours.

Thomas Philippon is Associate Professor of Finance at New York University - Stern School of Business. His research focuses on finance and macroeconomics. It includes empirical and theoretical work on financial distress and systemic risk; the links between asset markets, corporate investment and firm dynamics; the evolution of the financial industry; the design of optimal interventions during financial crises; labor relations and unemployment; corporate governance and accounting manipulations. Philippon won the prize for Best Young French Economist in 2009 (Cercle des économistes/Le Monde), the Brattle Prize in 2008 (for the best paper in Corporate Finance), and the Stylo d’Or de l’ANDRH in 2007 (for the best book on Human Resources Management). He was elected Global Economic Fellow in 2009 by the Kiel Institute for the World Economy. Philippon is a graduate of Ecole Polytechnique and received a PhD in Economics from MIT. He joined the faculty of New York University in 2003.

Brian Fabbri is Chief Economist for North America at BNP Paribas in New York. According to Reuters and Dow Jones news services Mr. Fabbri has had the best record at forecasting the FOMCs monetary policy decisions over the past two years. As Chief U.S. Economist for North America at BNP Paribas in New York, Brian Fabbri provides BNP Paribas traders and clients around the world with forecasts on economic, political and financial developments in North America. He also presents global views on European and Japanese economic and financial developments to U.S. clients, and publishes a weekly economic report covering the most recent economic issues. Prior to joining the Bank in 1994, Mr. Fabbri was Chief International Economist for Midland Global Markets, a Director of Midland Bank Plc. Asset Liability Committee, and an Executive Director of Midland Bank Plc. in New York. Before joining Midland, Mr. Fabbri was Senior Vice President, Chief Economist and Director of Institutional Research at Thomson McKinnon. Previously, Mr. Fabbri was Vice President and Senior Economist at Salomon Brothers, responsible for domestic economic research. Mr. Fabbri also served as an economist and head of the capital markets unit at the Federal Reserve Bank of New York. Mr. Fabbri is a Corporate Director of EULER. He also functioned as Director of SAFR (Reinsurance) from 1995-1998; and Elgistan Capital Management from 1996-1999. Mr. Fabbri regularly appears CNBC and other business networks and radio shows, and is frequently quoted in print publications. He is a member of the National Association of Business Economists, the New York Association of Business Economists, the Downtown Economists Club and the Money Marketers.Mr. Fabbri holds a B.S., M.B.A. and a Ph.D. from New York University.

«CONFERENCES@934» is a series of monthly conferences organized by the Consulate General of France that bring together two leading experts, one French and one American, who confront their analyses on international issues.