In the series « Conferences@934 », the Consulate General of France in New York has presented:
"Reconstructing the Past Using the Tools of the Future: 3D Technologies and the Giza Pyramids." 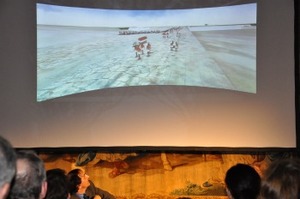 Today, you can digitally model anything with lifelike realism – test it, try it, optimize it – all before it exists physically. From sitting in a virtual car to planning traffic flows, from choreographing maintenance operations to digitally reconstructing an archaeological treasure, digital online 3D will transform consumers into consum-actors – and the virtual world into a lifelike experience. Our two speakers – Al Bunshaft, Managing Director, Dassault Systèmes North America, and Peter Der Manuelian, Professor of Egyptology at Harvard University, and the Giza Archives Project Director at the Museum of Fine Arts, Boston – will discuss the use of 3D software technologies to learn, discover, experience and innovate in all sectors of the economy. They will feature an innovative project for the famous Giza Pyramids: an international collaboration to create a fully immersive, real-time 3D virtual environment of the archaeology of the Giza Plateau, just west of modern Cairo.

Speech by the Consul General of France in New York, Mr. Philippe Lalliot:

"3D technologies have been made popular these last few years, notably thanks to their use in movie theatres. However, the possible applications of these technologies remain largely unknown by the general public. There are infinite possibilities. They have already begun to revolutionize retail, medical research and industrial processes. They also allow for us to make breakthroughs in to mysteries from our most ancient history as this project on the Pyramids at Giza shows." 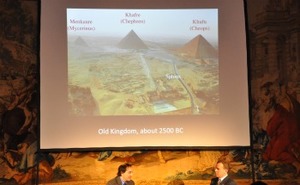 To learn more about Dassault Systemes and 3D technology

Al Bunshaft, is the managing director of Dassault Systemes’ North America organization. He brings to Dassault Systemes more than 25 years of developing and delivering innovative enterprise solutions to customers. He has held numerous leadership positions in technology, R&D, sales, and product development. In his new role at Dassault Systemes, Bunshaft is responsible for the structure, management and evolution of the 3000-person business operations in the United States, including the sales and development facilities of the five PLM brands residing in the geography. Prior to joining Dassault Systemes, Bunshaft served as global vice president of IBM PLM and led the company’s strategic partnership with Dassault Systemes. He played a critical role in leading a number of major automotive manufacturers and aerospace companies to transition from physical to digital design, and was instrumental in the development of the first automobile. Previously, Al served as IBM’s vice president of Infrastructure Solutions and leveraged his extensive technical background to assist customers in creating on-demand computing infrastructures. He led IBM’s Unix business in Asia and was based in Tokyo from 1998 - 2002. He first joined IBM in 1984 at the company’s Kingston, New York, Development Lab as a programmer designed through an all-digital process. Prior to joining IBM, Bunshaft was a member of the research staff at Renssalear Polytechnic Institute’s Center for Interactive Computer Graphics. He received his Masters of Science in Computer Engineering from RPI and holds a Bachelor of Science in Computer Science and Mathematics from the State University of New York at Albany. Bunshaft serves on the boards of numerous educational committees, including middle school, high school and university level organizations. He has been actively involved in supporting educational activities for the past 20 years.

- To learn more about Egyptology and 3D at Harvard University

Peter Der Manuelian, is Philip J. King Professor of Egyptology at Harvard University, and the Giza Archives Project Director at the Museum of Fine Arts, Boston. In addition to Giza, his Egyptian archaeological and epigraphic site work includes New Kingdom temples at Luxor (Epigraphic Survey, Oriental Institute, University of Chicago), and the Predynastic site of Naqada. His primary research interests include ancient Egyptian history, archaeology, epigraphy, the development of mortuary architecture, and the (icono)graphic nature of Egyptian language and culture in general. He has published on diverse topics and periods in Egyptian history, but currently focuses on the third millennium BC, and specifically on the famous Giza Necropolis, just west of modern Cairo. The Harvard University–Boston Museum of Fine Arts Expedition excavated major portions of the site between 1905 and 1947. Professor Manuelian’s “Giza Archives Project” aims to collect and present online all past, present, and future archaeological activity at Giza. Interested in both ancient and modern graphic design—“publishing” in the widest sense of the word—he believes in bringing new technologies into his research and into the classroom. Among his current projects are the publication of elite Giza tombs west of the Great Pyramid, a biography of Harvard archaeologist George A. Reisner, and the development of electronic tools to aid in teaching Egyptian hieroglyphic grammar.