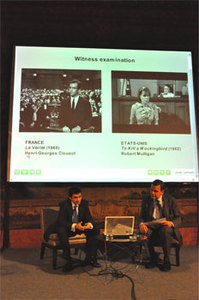 In the series Conferences@934, Antoine Garapon, Judge, Secretary General of the Institute for High Judicial Studies in France (IHEJ) and Daniel Schimmel, Lawyer, Partner of Kelley Drye and Warren LLP - New York gave a lecture on May 5th at the Consulate on the theme: 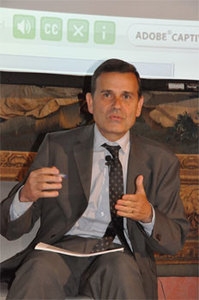 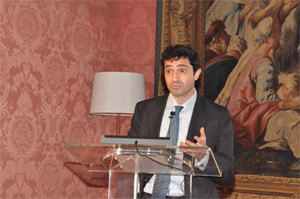 Listen to the whole conference:

To see more pictures, please visite the Flickr page of the Consulate. 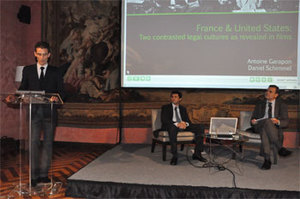 I am very happy to welcome you to the Consulate for this new edition of Conferences@934 which, as every month, mixes analyses and two personalities on a subject related to the Franco-American relationship, transatlantic dialogue and international relations.

It’s been now more than six months since this cycle of conferences was launched and I am happy to note that it continues to attract new participants. I remind you that you may continue tonight’s exchanges by becoming a fan of the Consulate’s Facebook page or by checking out the photos, video and audio recording of tonight’s event on our website beginning tomorrow.

Globalization touches all domains, including law and judiciary systems, the manner in which we conceive legal principles and how we apply them. This is true in Europe, where globalization is coupled with the growing integration of European Union States. I was able to test this when I pleaded on behalf of the French Government before the Court of Justice. More broadly speaking, it is also true on the international level. This means a more fluid and more rapid circulation of concepts, a more marked interest for what others are doing and the manner in which they work, intersecting influences but also exacerbated competition between judicial and law systems.

Hence the interest of the conference tonight whose purpose is to compare, based on very concrete cases, the American and French judicial systems and legal cultures. We are lucky to have with us tonight, two eminent jurists who are among the most well versed in comparative law.

At his side is Daniel Schimmel, partner at Kelley, Drye and Warren LLP, where he practices principally in the domain of international arbitration and litigation topics. He represents Lawyers without Borders at the UN. Daniel is also a perfect connoisseur of the machinery of the French judicial and law system. He is an alum of Columbia University School of Law and the University of Paris II.

Before beginning, I recall, in order for the discussion to be as free as possible, that the opinions expressed here are those of our guests and theirs alone. After a 30 minute presentation, Antoine and Daniel will respond to your questions. I propose we close the session at 7:45 to have a drink together. Antoine and Daniel, the floor is yours.

Judge Antoine Garapon, Secretary General of the Institut des Hautes Etudes sur la Justice (the Institute for High Judicial Studies in France), has led a double career as judge and researcher. He began his career as a juvenile justice and served in that capacity for many years. He earned a PhD in Sociology. His dissertation, on judicial rituals was published as a book "Bien juger. Essai sur le rituel judiciaire" (Odile Jacob, 1997). In 1990, Michel Rocard, the former Prime Minister of France, appointed Antoine Garapon to create the Institute for High Judicial Studies in Paris, with the purpose of stimulating research on judicial issues and challenges. Judge Garapon has been actively involved in promoting cooperation between French and American judges. In this context, he has published "Juger en Amérique et en France. Culture juridique française et common law" (co-authored by Ioannis Papadopoulos) (Odile Jacob, 2003), with an introduction by Justice Stephen Breyer. This book received the award of the Cercle Montesquieu, (French General Counsel in France Association). Antoine Garapon also manages the collection Bien commun at Michalon Publishing Co. and is Editor of the journal Esprit. He hosts a weekly radio program, « Le bien commun », on France-culture.

Daniel Schimmel is a Partner of Kelley Drye and Warren LLP in New York where he works with the Litigation Practice group. Daniel’s practice focuses on international arbitration proceedings, litigation, and internal investigations. He has written articles regarding international arbitration and litigation topics. Daniel is a member of advisory committees to the Federal Judicial Center on International Discovery and International Arbitration topics and a member of a task force to the International Chamber of Commerce Arbitration Commission. He represents Lawyers Without Borders at the UN. Daniel has participated in pro bono training programs for lawyers, prosecutors, and judges in Liberia, Sierra Leone, the Office of the Prosecutor of the UN International Criminal Tribunal for Rwanda and the Prosecution Division of the International Criminal Court in The Hague. He worked for ten years on a death penalty appeal in Florida. Daniel graduated from Columbia University Law School, the University of Paris II Law School and ESSEC. He was a first law clerk to the Hon. Jed S. Rakoff in the U.S. District Court for the Southern District of New York and an assistant de justice at the Tribunal de Grande Instance de Bobigny. For the last five years, Daniel has worked with Judge Garapon on a project comparing judicial cultures in France, the US and more recently in China.

"CONFERENCES@934" is a series of monthly conferences organized by the Consulate General of France that bring together two leading experts, who confront their analyses on international issues.