Conferences@934 : The Responsibility to Protect 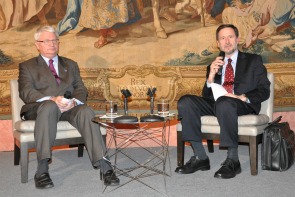 The Consulate general of France and the Alliance Program of Columbia University present :

Conferences@934 : The Responsibility to Protect: a New Tool for Peacekeeping

Hervé Ladsous, Head of the Department of Peacekeeping Operations at the United Nations

To attend the Conference, please RSVP at: rsvp.new-york-fslt@diplomatie.gouv.fr 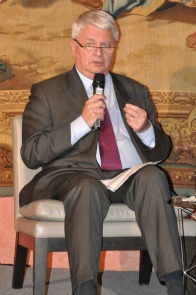 Hervé Ladsous is the Head of the Department of Peacekeeping Operations since October 2011. Mr. Ladsous has extensive experience in the diplomatic field. He is recognized by his peers in all parts of the world for his talent to build consensus, his strong crisis-management capacities and an acute political judgement.

Mr. Ladsous has held an extensive number of positions in the French Ministry of Foreign Affairs, since he joined in 1971. As a junior diplomat he was posted to Hong Kong, Canberra, Beijing, and the Permanent Mission to the UN in Geneva. Having served as Deputy-Director General of the Department for the Americas he was appointed in Haiti. He then became Deputy Permanent Representative to the UN in New York.

Mr. Ladsous served as the French Ambassador, Permanent Representative to the Organization for Security and Co-operation in Europe (OSCE) in Vienna, and Ambassador of France to Indonesia and Timor-Leste. He then held senior positions in Paris including Spokesperson of the Ministry and Director General for Asia and Oceania. He was Ambassador of France to the People’s Republic of China, before holding the position of Chief of Staff for Alain Juppé, the French Minister of Foreign and European Affairs, until 2011. Hervé Ladsous became Officier de la Légion d’Honneur in 2009. 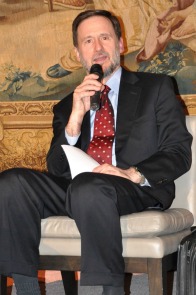 Michael Doyle is the Harold Brown Professor of U.S. Foreign and Security Policy at Columbia University, which is a three-fold appointment in the School of International and Public Affairs, the Department of Political Science, and the Law School. His research interests include international relations theory, international law, and international history; civil wars and international peace-building; and the United Nations. Since 2006, Doyle has been an individual member of the UN Democracy Fund, which was established in 2005 by the UN General Assembly to promote grass-roots democratization around the world. Doyle currently serves as the organization’s chairperson.

In 2001, Doyle was elected a Fellow of the American Academy of Arts and Sciences. In 2009, Doyle became a member of the American Philosophical Society, and, that same year, he received the Charles E. Merriam Award from the American Political Science Association.

Doyle previously served as assistant secretary-general and special adviser for policy planning to United Nations Secretary-General Kofi Annan. He formerly taught at Princeton University, Johns Hopkins University, and the University of Warwick in the United Kingdom. At Princeton, Doyle directed the Center of International Studies. He served as vice president and senior fellow of the International Peace Academy and currently is a member of its board.