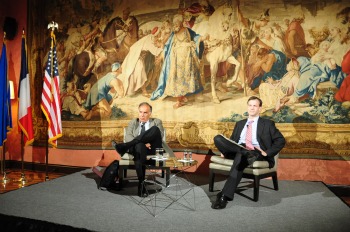 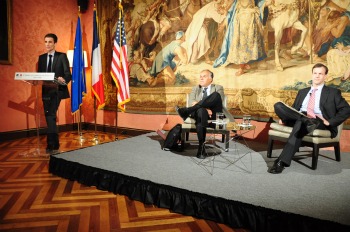 On January 19th, in the series « Conferences@934 », the Consulate General of France organized a lecture on the theme "Restoring Trust in the Global Economy : What Role for the G20 ?". A conversation featuring Stewart Patrick of the Council on Foreign Relations and Uri Dadush of Carnegie Endowment for International Peace.


Watch a video of the conference: 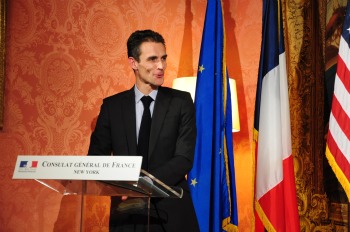 It is a great pleasure to welcome you to the Consulate tonight to open 2011 with this new session of Conferences@934. I hope we will continue to see such an impressive turnout this year and so confirm the success of these conferences.

Allow me to remind you that these conferences bring together two public figures each month, one French and one American, who confront their analyses on a subject relating to international relations and relations between France and the United States. I invite you to consult the conference schedule on our website and to become a fan of our Facebook page. You will also find photos, video and audio recording of each of these evenings on our website the following day.

We are here tonight to listen to and debate the G20 and its role in the world economy with our two guests. You undoubtedly already know that France has held the presidency of the G20 since last November. Ten days ago, President Sarkozy was in Washington to meet with President Obama and underlined that “France wants to work hand in hand with the United States” to propose “new ideas” on financial regulation, the international monetary system, commodity markets stabilization or the improvement of world governance.

This agenda is ambitious and in proportion with the challenges with which we are collectively confronted today. The questions which are posed and those which will be addressed at the next G20 Summit in Cannes this November 3rd are complex and the principal actors are divided as to the answers.

Without pretending to exhaust the list of questions let us nonetheless examine a few: What role for the dollar in today’s world? Which mechanisms could permit to stabilize the commodity markets? What funding for development aid? What connection between the G8 and the G20 and with the United Nations and the IFIs? More generally, is the G20 an efficient instrument to reduce global imbalances whatever their nature may be (institutional, political, economic, or financial) and notably can the G20 restore confidence in the global economy?

Before turning the floor over to them, allow me to present tonight’s two guests.

Dr. Stewart Patrick is senior fellow and director of the program on international institutions and global governance at the Council on Foreign Relations. He taught international relations and conflict management at John Hopkins University’s School of Advanced International Studies. He has published several books as well as several articles. Specializing in multilateral cooperation and American foreign policy, Stewart Patrick served on the policy planning staff from 2002 to 2005. I’d like to point out that he recently wrote a very interesting report for the Century Foundation entitled The G20 and the United States: Opportunities for More Effective Multilateralism.

Uri Dadush is senior associate and director at the Carnegie International Economics Program. Uri Dadush used to work for many years for The Economist Group. He was also a consultant at McKinsey, then director of economic policy and director of international trade at the World Bank. Currently at the Carnegie International Economics Program his work focused notably on the financial crisis and the euro crisis. He is particularly interested in the implications of the rise in power of developing countries with regard to financial, commercial and migratory flows.

Before beginning, please allow me to remind you the rules of this game. Each gentleman will speak for ten minutes or so. This will be followed by half an hour of Q&A with you. We will try to end the session around 7:45. I’d like to add that the opinions expressed here are entirely those of our guest speakers.

Without further ado, I turn the floor over to Stewart Patrick. 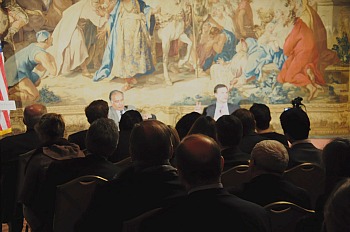 The lecture has been followed by a Q&A session with the public. 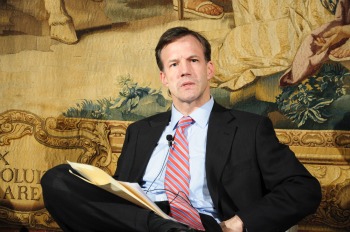 Dr. Stewart Patrick, is senior fellow and director of the program on international institutions and global governance at the Council on Foreign Relations (CFR). His areas of expertise include multilateral cooperation in the management of global issues. From 2002 to 2005, Dr. Patrick served on the secretary of state’s policy planning staff, with lead staff responsibility for U.S. policy toward Afghanistan and a range of global and transnational issues. Prior to his government service, Dr. Patrick was a research associate at the Center on International Cooperation at New York University from 1997 to 2002. He also served as a professorial lecturer in international relations and conflict management at Johns Hopkins University School of Advanced International Studies. He is the author, co-author and editor of four books and of numerous articles and chapters on the subjects of multilateral cooperation, state-building, and U.S. foreign policy. 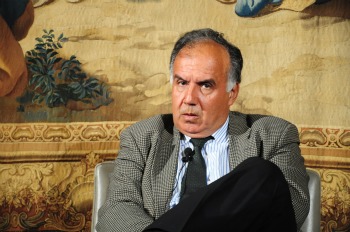 Uri Dadush, is senior associate and director in Carnegie’s International Economics Program. His work currently focuses on trends in the global economy, the global financial crisis, and the euro crisis. He is also interested in the implications of the increased weight of developing countries for the pattern of financial flows, trade and migration, and the associated economic policy and governance questions. A French citizen, Dadush previously served as the World Bank’s director of international trade and before that as director of economic policy. He has also served concurrently as the director of the Bank’s world economy group, leading the preparation of the Bank’s flagship reports on the international economy. Prior to joining the World Bank, he was president and CEO of the Economist Intelligence Unit and Business International, part of the Economist Group (1986–1992); group vice president, international, for Data Resources, Inc. (1982–1986), now Global Insight; and a consultant with McKinsey and Co. in Europe.