Home > Facing a World in Crisis, Can Europe Speak With One Voice?

Facing a World in Crisis, Can Europe Speak With One Voice?

Facing a World in Crisis, Can Europe Speak With One Voice?

The European Union is facing an unprecedented number of conflicts and crises at its eastern and southern periphery, from Ukraine to Syria to the Sahel Sahara. Ambassador Pierre Vimont, who directed the launch of the new European External Action Service, and prize-winning historian Adam Tooze discussed European efforts to address these conflicts, as well as the profound implications that these crises have on the European Union itself. You can find all the pictures of the event on Flickr.

This event featured stimulating keynote presentations by each of our guests followed by open discussions.

• Pierre Vimont is Senior Associate at Carnegie Europe and served as the Executive Secretary General of the European External Action Service from 2010 to 2015. Prior to that, Mr. Vimont was the Ambassador of France to the United States from 2007 to 2010. He was also chief of staff to the Minister of Foreign Affairs, Ambassador and Permanent Representative of France to the European Union. Holding the rank of Ambassadeur de France in the French civil service, he is a knight of the National Order of Merit, and a commander of the National Order of the Légion d’Honneur. 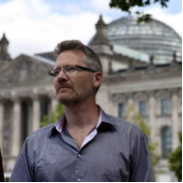 • Adam Tooze is the Director of the European Institute and the Kathryn and Shelby Cullom Davis Professor of History at Columbia University. He previously taught at Yale University and at the University of Cambridge. His latest book, The Deluge: The Great War and the Remaking of the Global Order, 1916-1931, was awarded the LA Times Book Prize for History 2015. His previous book, Wages of Destruction: The Making and Breaking of the Nazi Economy, won the Wolfson and Longman History Today Prize. Professor Tooze is currently completing a new global history of the Great Financial Crisis of 2007 and after.

This event was co-sponsored by the European Institute at Columbia University with the support of the Getting to Know Europe Program of the European Union.

Conferences 934 is a series of monthly conferences organized by the Consulate General of France that brings leading experts who share their analyses on international issues..
More information: http://www.consulfrance-newyork.org or on