Home > News > Recipe of the month > Filets of Sole Dieppoise

Our chef Sebastien Baud shares once again one of his favourite recipe. This month, we continue our trip in Normandy with the "Filets of Sole Dieppoise". Bon appétit !

This month, we will continue our exploration of Normandy, with another signature dish of the region, the Sole Dieppoise. Before presenting the recipe, I would like to give a little background about Normandy and its culinary heritage.

In Normandy, eating well has truly been elevated to an art, a unique form of happiness to be enjoyed by the spoonful. Well known for its welcoming culture and entertaining, Normandy’s cuisine highlights the region’s best seafood and abundant crops; it is rich and generous, with diverse and refined flavors.

It is worth noting that Normandy was the birth country of Guillaume Tirel, also known as Taillevent, a Master Cook of King Charles V and King Charles VI, and the author of one of the first French cookbooks from the Middle Ages, “Le Viandier”.

Normandy is France’s leading producer of oysters, mussels and scallops, but Normans, especially in the Orne region, are also meat lovers. Saltbush lamb is a local specialty. The flocks graze on the saline meadows of Mont Saint-Michel and Cotentin, giving the meat a unique subtle iodine flavor. The region is also celebrated for its charcuterie: the tripes à la mode de Caen are a highly creative and flavorful way of preparing beef offal, and are enjoyed well beyond the borders of Normandy. The dish also has many local variations: in Ferté-Macé, tripes are prepared in little packets, in Coutances, cream is added to the preparation, and in Authon-du-Perche it is cooked with lard. The Caen recipe remains the best known, especially abroad. Vire chitterlings sausages are also a celebrated local delicatessen specialty.

Norman and Jersey cows are famous for the quality of their milk. Dairy products, cheese especially, are prominent in the region’s culture. Normans’ use of butter and cream in their cooking has become almost legendary. During the Renaissance period, they were the ones who pushed for the switch to butter instead of lard in cooking. In 1651, La Varenne wrote in “Le Cuisinier François” that “Normans put cream in most of their sauces, with cod, sole, oysters for example”. As for cheeses, the most famous French cheese is undoubtedly the Norman camembert.

Sole Dieppoise is a traditional Norman dish, stemming, as its name indicates, from the Dieppe region. According to Joseph Favre, a Swiss chef and a French culinary expert, the sole has to be cooked in an oven, in a combination of fish stock, white wine and reduced juice that has been thickened and seasoned. White mushrooms and mussels, the bases of a Dieppoise garnish, are then added, and put on top of the sole. The dish is served with a thickened kneaded butter sauce. 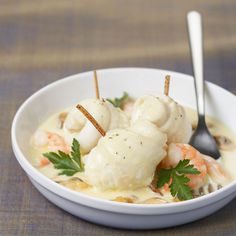 Rinse and scrub the mussels well before putting them in a saucepan. Add the white wine, one diced shallot, and pepper. Cook for a few minutes. Once the mussels are open, shell them and filter the cooking juice.

Peel and dice the remaining shallot. De-shell the shrimps. Slice the white mushrooms and sauté in butter. Set the cooking juice, shrimps and mushrooms aside.

Melt 40g of butter in a pan. Add 40g of butter, and combine. When the mixture becomes slightly frothy, add the crème fraiche and a little of the sole cooking juice. Allow the sauce to thicken, and combine with the mussels, the mushrooms and the shrimps. Check seasoning, and cook for a few more minutes.

I would like to end with a quote from Jean Anthelme Brillat-Savarin, and to wish you Bon Appétit!

“The Creator, by obliging man to eat to survive, invites him by appetite, and rewards him with pleasure.”

Please drop me a note if you have a question, comment or recipe request at: chef.consulat@icloud.com