Home > News > Tech news > France and the NYCEDC sign a one of a kind partnership to fuel (...)

On Friday 20th of April, The City of New York and France signed a partnership agreement to fuel international expansions and investment in the tech and innovation sectors. The partnership was developed by New York City Economic Development Corporation (NYCEDC) and La French Tech NYC respectively represented by James Pratchett, CEO of NYCEDC, and Anne-Claire Legendre, Consul General of France. 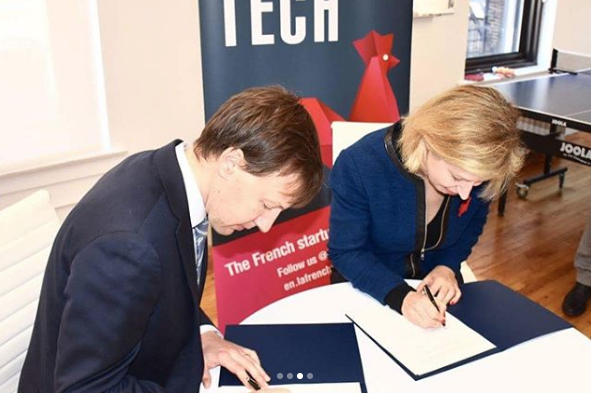 “This is the first agreement of this kind we sign with a foreign organism” declared Mr. Pratchett, NYCEDC. The relationship between New York City and France has indeed been mutually beneficial: France is a leading source of foreign direct investment to New York City, investing over $7.2 billion and creating over 21,000 jobs in the city over the last fifteen years. There are currently 180 French startups in New York City helping to fuel high growth and legacy sectors in advertising tech, AI, and retail, among others.

Alexandre Winter, French Tech Ambassador and Co-Founder of Placemeter declared that, "In the past few years, New-York has become the best and de-facto choice for European entrepreneurs to set up shop in the US. It is the second largest startup and VC market behind Silicon Valley, and has also become the largest hub for AI researchers, engineers and technology since last year. As a French deep tech entrepreneur and proud Brooklynite, I am very excited that this agreement solidifies even further the strong links that already exist between France and NYC"

"New York is one of the most dynamic tech hubs and has become the first destination in North America for French entrepreneurs. This agreement with New York City has been established to help those entrepreneurs develop their startups, including having better access to local incubation programs, coworking space, work visas through the IN2NYC and public procurement.”, declared Consul General Anne-Claire Legendre.