And then there were six! A new-generation Ariane launcher is on the drawing board. The rocket – which is designed to launch communications satellites – is scheduled for delivery in 2021, thanks in part to French expertise in space technology. 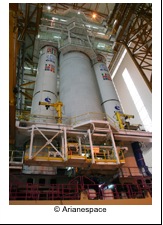 On 21 November, ministers from the 20 Member States of the European Space Agency met in Naples to take some strategic decisions on the future of the space programme in Europe.

By the end of the meeting, it had been decided to set a budget of €10 billion covering all European space programmes over five years. €300 million will be ring-fenced for the design phase of Ariane 6, the launcher intended to replace Ariane 5. The project is being supported by, amongst others, France and Arianespace, the European company responsible for marketing and operating the space launch systems developed by the European Space Agency.

As the French Minister for Research, Geneviève Fioraso, declared, “it has been decided to make the move to Ariane 6, with the aim of creating a more robust launcher that reflects the changes in the market more closely, whilst optimising the transition to protect jobs and industrial skills.” A transitional stage based on the Ariane 5 ME (mid-life evolution) programme, an improved version of Ariane 5, is therefore included in the agreement signed in Naples. The final programme will be decided by the Ministerial Council of the European Space Agency in 2014.

In technical terms, Ariane 6 will offer, in particular, the advantage of flexibility based on the load being launched – between two and eight tonnes. The launcher should also be able to transport a single satellite, which would make it possible to respond to a request from a client more quickly, without having to wait until a second one is ordered.

Arianespace also plans to reduce manufacturing costs and make its offering more flexible. Ariane 6 is therefore likely to consist of a single stage only, which can be re-ignited. The design should help to reduce the current bill of €170 million to €70 million for Ariane 6.

According to Arianespace’s CEO Jean-Yves Le Gall, “Ariane 5 has now reached maturity; Ariane 6 will be the launcher for the next decade.” The inaugural launch of the new rocket should be scheduled for 2021 or 2022.

French manufacturers at the controls

For France, the Ariane programme involves thousands of jobs and major industrial skills. Indeed, the French group Astrium is in charge of producing the rocket. The subsidiary of the EADS group employs 18,000 people. It sees these projects as a sign of genuine consolidation of the space programme in Europe for the future.

Among other things, the group is in charge of assembling the first stage of the current Ariane 5 at its factory in Les Mureaux, near Paris. It is also working on the design of the fuel tank in conjunction with Cryospace, a subsidiary owned 55% by Air liquide and 45% by Astrium. Several of Ariane’s components are made by other French firms, such as Snecma, a subsidiary of Safran, which is responsible for the Vulcain engines. In total, almost 200 firms are involved in building the colossal 770-tonne rocket.

Kourou: the place to be

Ariane’s solid propellant rocket motors, designed by Europropulsion (Snecma and the Italian firm Avio) are assembled directly at the Kourou site to avoid the risks inherent in their transport. Kourou has been home to Guyana’s space centre since 1973 and is used as the launch pad for European rockets, not only Ariane but also Vega, which have a smaller launch capacity (1.5 tonnes) and the Russian Soyuz, which sits between the two in terms of capacity.

The French National Centre for Space Research (CNES), Arianespace and the European Space Agency, which manage the site, have a comprehensive range of launchers. Following a total of ten scheduled launches in 2012, the company Arianespace has scheduled a further dozen in Kourou in 2013.