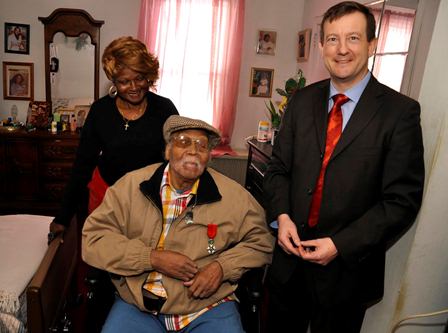 The Consul General of France in New York, Mr. Bertrand Lortholary, on behalf of the President of the French Republic, Mr. François Hollande, bestowed on Wednesday, December 18 the insignia of the Legion of Honor upon Mr. Wilkins, in recognition of his exceptional merits, and as a tribute for his involvement in the liberation of our country during World War II.

Mr. Wilkins served in the US Army’s Graves Registration Unit, which landed in Provence in August of 1944. During that campaign, Mr. Wilkins lost his military identification tags (“Dog Tags”). They were retrieved by accident in 2001, buried in the backyard of a private home in the French town of Istres, Provence. It took several years of investigations, in collaboration with both French and American administrations, to find Mr. Wilkins.

On May 8, 2013, on the occasion of the commemoration of Allied victory in Europe, Senator Cory A. Booker, then Mayor of Newark (New Jersey), where Mr. Wilkins resides, presided over a ceremony during which the veteran received his Dog Tags.