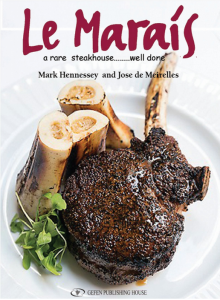 Le Marais was opened in 1993 with the goal of providing classic French Brasserie cuisine to the kosher community in New York. The owner, Jose Meirelles, formerly owned Les Halles - the birthplace of Anthony Bourdain’s stardom - with Philippe LaJaunie. Keeping close to the laws of Kashrus has never forced Le Marais to deviate from its original theme - offering a relaxing French Bistro Style fare in the heart of a bustling city. The favorites of Le Marais’ customer base include Chili Morocaine, charcuterie, and classic cuts of Beef served with frites and salad.

Mark Hennessey graduated from the Culinary Institute of America in 1994, just one year after Le Marais was born. Mark eventually answered a New York Times ad and was hired as the head chef at Levana’s on the Upper East Side. Before he knew it, he was learning how to adapt his training into a world of cuisine he never knew before. Landing at Le Marais shortly after, Mark was looking to get back to his roots of Bistro-Style cuisine. Just his luck, he found out that Le Marais was kosher at his interview, and landed his job there after 15 minutes. Le Marais allowed Mark to experiment with great food and great French cuisine that just happened to be kosher. Le marais participates to this event with the Jewish American French Allaince (JAFA) which is the leading American French Jewish Network in America.

Discover what Mark Hennessey will cook for you on March 21st :