I.H.E.S. Charity Gala at the Consulate General of France in New York 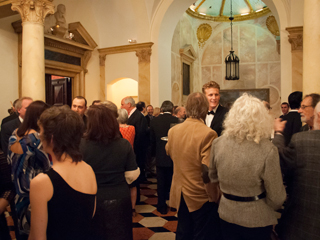 The Consulate General of France in New York hosted the Charity Gala of the French Institute of Advanced Scientific Studies (IHES), on Monday November 12, 2012. The event’s theme was “Beauty and Mathematics”.

The Gala’s aim was to raise funds for financing two research-years in Mathematics and Theoretical Physics. Two short movies were shown that evening: "A Beautiful Formula" by François Tisseyre, and "Mathematician Jim Simons Businessman" by Olivier Peyon. The "Forbidden Flute" Trio played "Orbit Design", a piece composed by Derek Bermel who was inspired by Professor Helmut Hofer’s work. Several lithographies of the Galerie Mourlot, as well as a Logarithmic Spiral dress by Eri Matsui, were sold at the auction.

See the photos of the event