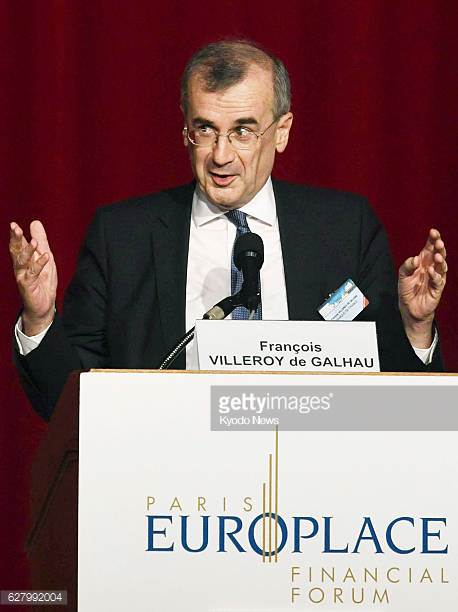 BLOOMBERG : Now, the ECB could be said to hike rates soon after the end of QE. The Governing Council Member and Banque de France Governor, François Villeroy de Galhau, told the GIC Central Banking Series here in Paris that he expects a move within quarters of a wind-down in bond buying rather than years. He joins me now for an exclusive interview. Governor, as always, thank you so much for giving us a little bit of your time right here on Bloomberg TV. First of all, when you look at growth in Europe – I want to come back to the normalisation of monetary policy, but do you think European growth has peaked?

François Villeroy de Galhau : European growth remains strong. It was especially strong last year with 2.5% and with an acceleration in Q4 and we had probably some kind of setback in Q1 with 0.4%, but we think this is mainly due to temporary factors. We will look precisely at the data which will be published in the coming weeks. We just published for the French economy our first preliminary estimate at 0.3% for Q2, but economic orders remain positively oriented and we do not see at this stage a trend change.

I mean, OK, a trend change…

Let me stress one thing…

You’re expecting it to get higher. The trajectory is kind of… Our forecast for the Euro area economy this year is 2.4%, published last March, so we will see how it will be in June, but it’s not an acceleration compared to last year. It remains at a very solid level with a broad based growth.

Governor, you were at pains in saying at your speech that actually once the normalisation process starts in terms of asset purchases, you won’t be too quick or too, I guess, late in actually raising interest rates. How important is it that the market understands this correctly?

First, we will have to decide about the end of the net asset purchases, as soon as SAPI (sustained adjusted path of inflation) is fulfilled. As I already said, whether it will end in September or December is not a deep existential question. The sequencing, we said that the first rate hike would come well past, I quote, the end of this net asset purchases, and what I explained is that we will give probably additional guidance before the end of the year about the timing of this first rate hike and about its contingency. Let me explain that. About the timing, well past meaning at least some quarters, but not years, and about the contingency, it will be contingent also on the inflation outlook, then we will see exactly how we will formulate it. We are predictable and it’s a clear virtue of our gradual normalisation path, but we are not pre-committed, because we look at data and the economic situation as it is and as it will be.

But, Governor, when you say “some quarters”, could we assume that’s six months from the asset purchase kind of normalisation or could it be nine months?

English is not my native language but I understand that some can mean several figures.

OK, so it can be up to three or even four.

OK. Governor, when you look at the main concerns or the main challenges for the ECB right now, is it communication to the markets?

I don’t think we have specific concerns. We have clearly a mandate, which is price stability, and coming back in a midterm perspective to a 2% inflation, close to but below 2% as the inflation target, so we are making progress towards this target; despite some transient effects, inflation is at present rather low in the Eurozone with 1.2% for the first estimate for April, but we think that inflation will resume its progress in the Eurozone in the coming [four] months and these are clearly temporary effects, so we are clearly focused on delivering our mandate on price stability and we have been efficient, because two years ago there were still deflation risks in the Euro area. Last year we were at 1.5% and we expect inflation in 2020 to be at 1.7%.

How much does a higher price of oil help in reaching your inflation target?

How much of a risk is political tensions, trade wars, trade tensions between the U.S. and China to the European economy?

This is a very important topic. Our role is not to comment about political decisions, but it is to look at the possible economic consequences of geopolitical decisions, and clearly trade wars or let us call it protectionism could have a detrimental effect on global growth. Through the effects of tariffs, if they were to be introduced, we estimate a 10% general increase of tariffs to slow down world growth by more than 2%, but also and already perhaps through uncertainty that’s introduced without having tariffs yet, but business confidence could be affected by the threat of protectionist measures. It is what we have seen in Great Britain, like the Brexit referendum, and it is what could be seen at present in some North American countries like Canada, so we should be very cautious about avoiding as much as possible such detrimental measures to world growth.

I know you won’t talk about politics, but do you worry about the Italian economy because of possible populist measures, so maybe labour reforms being pushed back and fiscal spending increasing too much. Again, it is not our role to comment about politics, and it is still less our role to comment about domestic economic policy decisions, except for my own country, and this is my role and we clearly welcome the acceleration of reforms in France, which is very spectacular. But if we look at the global picture in Europe, it remains very favourable. It is important that all countries use this economic environment to pursue the fiscal consolidation, and we should be extremely clear that the ECB, there will not be any kind of fiscal dominance. To put it in clear text, nobody should expect us to delay our own monetary policy normalisation in order to accommodate debt problems of any member state.

Would you say the same worldwide? Is growth strong enough – we were talking about monetary policy normalisation almost worldwide, but then we saw some concerns on growth worldwide, which may be, relating to what you were talking about with trade tensions. Monetary policy is adapted to the domestic environment it has to deal with, be it in the Eurozone, in the U.S. or elsewhere. But what I said about fiscal consolidation in this favourable cyclical moment is true probably for other countries outside the Eurozone, including probably the U.S. We shouldn’t develop, implement, or governments shouldn’t develop pro-cyclical fiscal policies which could accelerate the cycle now, but create problems in the future. Governor, I know you don’t want to talk about individual domestic growth, but is there a danger that, actually, German growth has peaked and, again, what does that mean for ECB policy? I come back to the Eurozone growth, as a whole, it is high, it is robust, and you couldn’t expect an acceleration forever. Again, the last quarter of 2017 had growth of the euro 0.7%, which was especially high, so there was some kind of stabilisation. At this stage, we think temporary factors are at work, but we will study cautiously, as always, if there could be some changes due among others to the protectionist threats we discussed about. We are not yet there.

Do you think the threats of currency wars has died down compared to two/three months ago? At present, we see no signs of currency wars, and clearly, we all committed (the G20 members and all the IMF countries) to target our monetary policies according to domestic goals, mainly price, stability, and not to target our exchange rate for competitive purposes. This is the precise wording of the G20 in Buenos Aires in March, of the IMF communique in Washing D.C. last April and this is the way it should work, this is the way it works at present, which is good news. It brings stability in this uncertain world.

I know the ECB officials, and you won’t talk about a euro target or a euro level, but is there a range that you have in mind for the ideal euro level for French exporters? The short answer is, no. We have no exchange rate target. We look at the effects of the exchange rate on our inflation outlook, which is a different story. Some months ago we said the disorderly or excessive volatility of the exchange rate required monitoring from our side. If it would be again the case in the future, we would probably repeat the same thing.

A final question, I actually have two, but I think I only have time for one on crypto assets. You were talking about it in your speech in relation to one of the questions. What form do you think they will become and can it be dangerous for Central Banks that it takes so much weight? First, you are right, it is about crypto assets and not cryptocurrencies, because as we said in the G20, they don’t have the key attributes of a sovereign currency. The technology is very promising (blockchain) and we at the Banque de France are developing it in a very innovative way, but there are risks associated with these assets, but in the short run, not financial stability risks due to the rather low volumes, but risks about money laundering and risks about consumer protection. On these two issues, the G20 required the Financial Stability Board and the standard setting bodies, including FATF for anti-money laundering to study adequate responses until our next meeting in July, so expect more on these two issues. It is very important that we give precise guidelines to avoid threats, to avoid excesses from the development of these crypto assets.

Governor, thank you so much for joining us today on Bloomberg Surveillance.