The Hermione – a faithful reconstruction of the frigate in which Lafayette sailed to the Americas in 1780, bringing news of French support and troops, is ready to cross the Atlantic again, in 2015. Its original voyage represented the pivotal turning point in the American War of Independence.

The Friends of Hermione-La Fayette in America , the U.S.-based organization that will prepare the American welcome, organized a cocktail at the French Consulate in New York on Wednesday, September 25.
A press kit presenting the project was distributed to the attendees, consisting of French and American business leaders, representatives of government and cultural organizations. Mme Ségolène Royal, President of the Poitou-Charentes Regional Council, and a former Minister in the French government, also made a statement: “Lafayette’s Frigate of Freedom is being brought back to life. […] You began the history of democracy in the world, help us to complete the Hermione’s mission”.
Mr. Bernard Grasset, Mayor of Rochefort, Charente-Maritime, where the Hermione is now readying for sea trials, was also in attendance.

President of the Friends, Mr. Miles Young, said: “We are thrilled to have Dr. Kissinger’s advice and leadership. Nothing testifies more strongly that this is much more than the voyage of a ship, but that it is also about the spirit of democracy. La Fayette epitomized that. As an American General at the age of 19, and with the belief that anything was possible, he speaks to us down the generations. Voyage 2015 will celebrate that spirit, and its particular relevance to American and French young people today.” 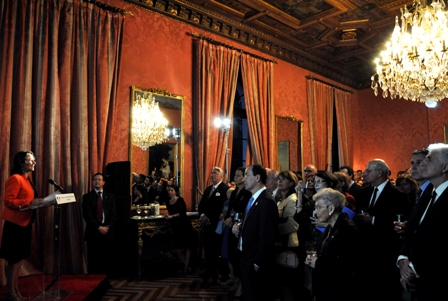 The Friends of Hermione-La Fayette announced that the frigate will leave Rochefort in mid-April 2015 and return to France in August. The first landfall will be Yorktown, Virginia, where the British surrendered, and at which the original Hermione saw action. Other cities to be visited were provisionally announced as Norfolk, VA; Alexandria, VA; Baltimore, MD; Philadelphia, PA; New York, NY; Greenport, NY, and Boston, MA before departing for Nova Scotia.

The Friends of Hermione-Lafayette also announced that Moët Hennessy had signed up as a Foundation Sponsor for the voyage.