Conference@934: Lecture by Françoise Barré-Sinoussi on March 16th at the Consulate 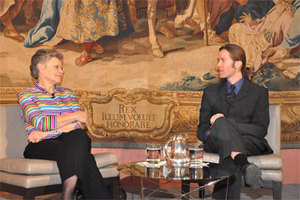 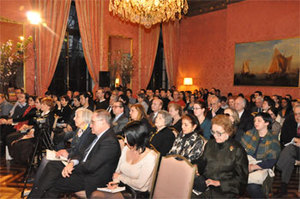 In the conference series "CONFERENCES@934" organized by the French Consulate, Françoise Barré-Sinoussi, Nobel Laureate in Medicine and Ian J. Glomski, Assistant Professor of Microbiology, gave a lecture on March 16th at the Consulate on the theme: “Pandemics: Lessons Learned from the Fight Against AIDS”

To see more pictures of the conference, visit the Consulate’s Flickr page.

To watch video extracts of the conference: 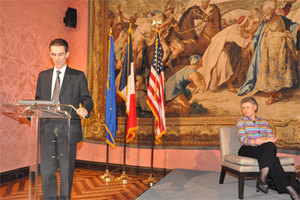 Welcome to the Consulate of France, for this fifth edition of Conferences@934. The four previous sessions have all led to passionate exchanges. It’s all thanks to you. Do not hesitate to continue these exchanges by subscribing to the Consulate Facebook page or by checking out the photos, video and audio recording of the evening on our website.

Since November, we have covered very diverse subjects: Afghanistan and Pakistan, EU and the Lisbon Treaty, the French model of integration and financial regulation.

Tonight we will speak about the fight against pandemics and the lessons which can be drawn from the fight against AIDS. It’s a complex issue, with multiple dimensions that are scientific, medical, economic and political. It is also an essential subject, at the heart of public health policy in developed countries and even more so in developing countries.

To speak on this issue, I’m very happy and proud to welcome Francoise Barré-Sinoussi, one of the most renowned specialists in the world on virology and immunology. In 2008, Françoise received the Nobel Prize in Medicine for her contribution to the discovery of the AIDS virus. Her work gave way to more than 200 original publications in international scientific reviews and 17 patent applications.

Francoise Barré-Sinoussi leads the Unit for the Regulation of Retroviral Infections at the Institut Pasteur. She has established numerous collaborations with countries most affected by the HIV/AIDS epidemic, in particular through the Institut Pasteur International Network. She actively promotes a better interaction between research and public health programs and transfers of technology towards Africa and Asia.

At her side tonight, Ian Glomski, an expert in molecular and cellular biology and Professor at the University of Virginia. For fifteen years, Ian has concentrated his research on infectious diseases and in particular anthrax.

I would like to conclude in saluting the Institut Pasteur and its essential role in Franco-American scientific cooperation. General de Gaulle is known to have said that France has three institutions that must be carefully safeguarded: the Eiffel Tower, the Collège de France and the Institut Pasteur!

A private non-profit charity in France, the Pasteur Foundation was established in 1954, by a group of New Yorkers who wished to rebuild French science after World War II. The programs of the Pasteur Foundation open doors notably for American scientists in all phases of their careers by bringing them to the Institut Pasteur. A perfect example is Dr. Ian Glomski, a Pasteur fellowship recipient and a Judith P. Sulzberger Pasteur Scholar. To date, the foundation has allocated over $5.5 Million to its fellowship program for US scientists and wishes to develop it further.

After around twenty minutes of conversation, Françoise and Ian will respond to your questions. I propose that we close the session towards 7:45 to have a drink together.

Françoise, the floor is yours.

I’d like to say a last word about the upcoming Pasteur Foundation’s gala that will be held May 17th. The prestigious annual award of the Foundation will be given this year to Franck Riboud (Chairman and CEO of Danone) and to Nobel Peace Laureate and microfinance pioneer Muhammad Yunus.

I you want to have more details about supporting this gala evening (again the Foundation is a non-profit charity and they need your help) or if you simply want to learn more about the Foundation’s activities, you can have a word with Caitlin Hawke, Executive Director of the Pasteur Foundation who is with us tonight.

Françoise Barré-Sinoussi Ph.D., holds the title of Professeur at the Institut Pasteur. She is an Inserm Research Director and heads the "Regulation of Retroviral Infections" unit at the Institut Pasteur where she has been involved in retrovirology research since the early 1970’s. She was a recipient of the 2008 Nobel Prize in Medicine for her major role in the 1983 discovery of HIV, the virus that causes AIDS.

Ian J. Glomski Ph.D., is an Assistant Professor of Microbiology at the University of Virginia School of Medicine where his research focuses on anthrax. From 2003-2006, he was the Judith P. Sulzberger Scholar of the Pasteur Foundation’s Postdoctoral Fellowship Program, which brought him to work at the Institut Pasteur’s Toxins and Bacterial Pathogenesis laboratory.

«CONFERENCES@934» is a series of monthly conferences organized by the Consulate General of France that brings together two leading experts, one French and one American, who confront their analyses on international issues.