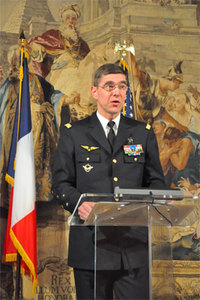 In the series «CONFERENCES@934» organized by the Consulate General of France in New York presents, General Stéphane Abrial, Supreme Allied Commander Transformation, NATO, gave a lecture on the theme:

"NATO and its Transformation in the 21st Century" 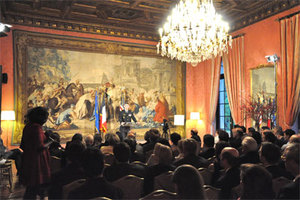 To see more pictures, visit the Flickr page of the Consulate.

I am very happy to welcome you to the Consulate of France for this new edition of Conferences@934. I’m all the more happy that tonight’s conference is organized jointly with the Foreign Policy Association. It is an organization whose dynamism I admire and whose activity program is just simply fascinating. I would like to thank Noël Lateef who came up with the idea for this event. Without him it would never have taken place.

We are going to speak tonight about NATO and it’s transformation in the 21st century. The relations between the Atlantic Alliance and France have always been complicated, at least since the decision to withdraw from the integrated military structure in 1966 made by General de Gaulle. Since then, by encouraging the European Defence policy, France has been suspected in Europe but also in the United States, of looking to weaken the transatlantic link. Yet at the same time, France has reconciled itself to NATO in stages, most often without saying so, notably by figuring amongst the principal contributors of troops to Alliance operations, by reintegrating the Military Committee or by participating in the Rapid Reaction Force.

President Sarkozy drew the conclusions from this situation contrary to our interest and decided one year ago to do what his predecessors couldn’t or didn’t want to do. His decision had an operational impact of course; it also has political significance. It is an element amongst others of our foreign and European policy as well as our defense and security policy. It is also an essential element in the improvement of Franco-American relations, which have been marked by increased proximity and trust, as the recent visit of President Sarkozy to New York and Washington showed.

President Sarkozy noted the objective of France remained to insure its security and its influence, with respect for its independence and its strategic autonomy. He also wished for the Alliance to adapt itself to new threats, for NATO to be more reactive and efficient and that it insure our collective defense as well as the missions that it leads in service of our security and peace, in compliance with the United Nations Charter. He wished for a reinforcement of the strategic partnership between the European Union and NATO as well as an opening towards nations in the Euro-Atlantic space.

To evoke these questions, we are lucky to have with us tonight one of the architects of the transformation of NATO, General Stéphane Abrial. You had the chance to read his impressive CV which was attached to our invitation. Allow me to simply recall that General Abrial has extensive experience both as a Fighter Pilot and an Operational Commander.

Among many prestigious postings, he took part in the liberation of Kuwait in 1990 and 1991 as Commander of the French Air Force’s 5th Fighter Wing. He also participated in the Executive Offices of the French Prime Minister and President. He served as Air Force Chief of Staff from 2006 to 2009. He was appointed as Supreme Allied Commander Transformation on July 29, 2009, becoming the first European to be appointed as head of a NATO strategic command.

General Abrial has accepted to give a thirty minute presentation before responding to your questions. I propose that we then close the session at 8:00pm.

Before beginning, I remind that in order for the discussion to be as free as possible, the opinions expressed here are the personal opinions of our speaker and are strictly off the record. Furthermore, our Facebook page is open for those seeking to continue the discussion as well as to inform you of upcoming events.

Mon Général, the floor is yours. 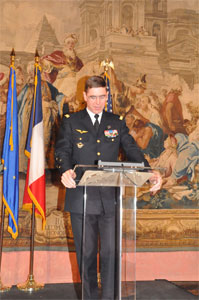 General ABRIAL received appointment by the North Atlantic Council as Supreme Allied Commander Transformation on 29 July 2009. He is the first European to be appointed permanently as head of a NATO strategic command. Born in 1954 in the South-West of France, he began his military service in 1972. After one semester in the US Air Force Academy, Gen. Abrial graduated from the French Air Force Academy in 1975. He completed his pilot training in 1976. Gen. Abrial has extensive experience both as a fighter pilot and an operational commander. He has a wide-ranging background that includes operations in coalition environments, at the tactical, operational and strategic levels. He served as a flight commander in a unit of the German Luftwaffe from 1981 to 1984 and with a unit of the Greek Air Force in 1988. In 1990 and 1991, he took part in the liberation of Kuwait as commander of the French Air Force’s 5th Fighter Wing during Operation Desert Storm. From 1996 to 1999, he served at the NATO International Military Staff in Brussels. He is a graduate of the U.S. Air War College, Montgomery, Alabama, in 1992, and of the French Institute for Advanced Studies in National Defence (IHEDN) in Paris, in 2000. He acquired broad experience in political-military matters through several appointments to the private offices of the French Prime Minister and President, and went on to serve as head of the French air defence and air operations command, and finally as Air Force Chief of Staff from 2006 to 2009. He has, among other distinctions, been elevated to the distinction of Grand Officer in the French Legion of Honour, and was made Commander of US Legion of Merit, and was awarded the German Verdienstkreuz der Bunderwehr (silver). Gen. Stéphane Abrial and his wife Michaela have two teen-aged children.