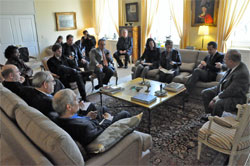 In the conference series "CONFERENCES@934" organized by the Consulate General of France in New York Dr. Richard Prasquier, President of CRIF and Mr. David Harris, Executive Director of the American Jewish Committee gave a lecture on March 24th at the Consulate on the theme: 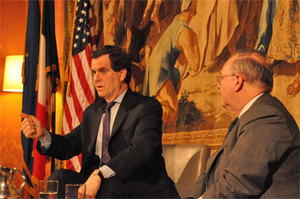 To see the pictures, please visit the Flickr page of the Consulate. 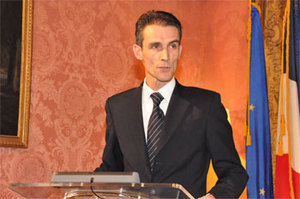 
I’m very happy to welcome you tonight to this new edition of Conferences@934, which we organize each month at the Consulate.

We wanted these conferences to touch upon the most important issues of international affairs and that are at the heart of the Franco-American relationship.

Tonight we will talk about the Jewish communities in France and the United States and the evolutions that they have seen with the renewal of generations and their aspirations. You know of course the importance of these communities, both in France and the United States, in all domains. What interests us tonight, is the crossing viewpoints held by each of these communities about themselves and also about the latest developments in current events in the Middle East, the day after the visit of the Israeli Prime Minister to Washington.

We have the honour to have with us tonight two leaders of these communities, both of whom are very listened to and very respected in France as in the Unites Sates.

Richard Prasquier is known for being an ardent defender of human rights, for his fight against intolerance and for his support for a pacifist resolution of the Israeli-Palestinian conflict. Richard Prasquier was very recently in Israel for a meeting dedicated to the dialogue between Jews and Christians. He will perhaps want to have a word with us about this shortly.

At his side, David Harris, who needs no introduction, that’s how much of a mark he makes on the American Jewish community and beyond. For more than thirty years, David criss-crossed Europe to witness the life conditions of Jewish communities and to promote human rights as well as interethnic and interreligious dialogue.

More than a witness, David is a protagonist with regards to the values he defends. He contributed to the emigration of more than one million Jews from the Soviet Union. He also played a key role in the evacuation of the Ethiopian Jewish community in the 1980s. Likewise, we consider David as a friend of France, a friendship which was saluted five years ago when he received the Legion of Honor.

Before beginning, I recall, in order for the discussion to be as free as possible, that the opinions expressed here are those of our guests and theirs alone. After a 30 minute conversation between themselves, Richard and David will respond to your questions. I propose we close the session at 7:45 to have a drink together. Richard, the floor is yours.


Richard PRASQUIER has been CRIF’s President since 2007. CRIF (Conseil représentatif des institutions juives de France) is an umbrella body comprising all French Jewish groups that was originally created in 1944 under the Vichy Regime. Nowadays, this national federation made up of 62 Jewish organizations is the voice of the organized French Jewish community in its dialogue with authorities and in the international media, including Le Monde, BBC and The Jerusalem Post. 2010 CRIF’s work topics include: French republican values and French Jewry; training for community leadership; remembrance of the Holocaust; fighting against anti-Semitism, racism, intolerance and exclusion; human rights; solidarity with Israel and support for a peaceful solution to the Middle East conflict; European and transatlantic relations.
Born in 1945, in Poland, Dr. Richard Prasquier arrived in France with his parents at age one. He studied medicine and completed a three-year residency in Cardiology in Paris hospitals. In 1974, he was Research Fellow at the Cardiovascular Institute of San Francisco University. He then became Head of Clinic at the University of Medicine in Paris. Involved in medical cooperation, he became President of Friends of Ichilov Hospital in Tel Aviv (Israel) in 1988. Since 1970, he has been active within the Jewish community. President of the French Committee for Yad Vashem, in 1998 he joined CRIF’s Executive Committee. From 2001 to 2007, he advised former CRIF President, Roger Cukierman. He was Head of the Commission on Solidarity at the Foundation for the Remembrance of the Shoah (FMS) from 2002 to 2007.
He is also a member of the International Auschwitz Committee and very active in the dialogue between Christians and Jews. He is Vice President of Yahad in Unum, whose President is Father Patrick Dubois. At CRIF, he directed the Commission for Relations with Catholics and the Commission for International Relations prior to his election as CRIF’s President.

David A. HARRIS is the Executive Director of the American Jewish Committee (AJC), founded in 1906. For more than thirty years, David Harris has travelled across Europe (he speaks French and Russian) and elsewhere to witness the life conditions of different Jewish communities, defend Israel and its diplomatic interests and to promote human rights, interethnic and interreligious dialogue on a whole.
He was involved in the emigration of more than one million Jews from the Soviet Union. David Harris also played a role in the evacuation of the Ethiopian Jewish community in the 1980s.He has testified on many occasions before the American Congress and the United Nations on subjects such as the Middle East, the expansion of NATO, and anti-Semitism.
He meets regularly with world leaders and contributes frequently to The New York Times, The Wall Street Journal, Financial Times, International Herald Tribune and various other media outlets. He also writes a popular weekly blog for the Jerusalem Post. He is a member of the Council on Foreign Relations.
He intervened before the Commission of French Foreign Affairs of the French National Assembly in April 2005 and he was raised to the rank of Chevalier of the Legion of Honor by the Minister of Foreign Affairs in New York in September 2005.
He is a graduate of the University of Pennsylvania, the London School of Economics and Oxford University. Currently, he is a Senior Associate at St. Antony’s College, Oxford University.