The Left Bank Bordeaux Cup “L.B.B.C.” – a competition organized by the Commanderie du Bontemps de Médoc, des Graves, de Sauternes et de Barsac – took place Tuesday January 22, 2013 at the Consulate General of France, among nine enology clubs from top American universities. The clubs competed for the first two places in the hope to become America’s representing finalists at the last stage of the contest, to be held this summer at the greatest vineyards of the Médoc region in France.

Under the authority of Grand Maître Emmanuel Cruse and his jury, the candidates began with a theory test, followed by a series of blind tastings. A keen sense of judgment and acute finesse allowed the teams from Yale Law School and Wharton Business School (UPenn) to win this year’s edition. Yale Law School was represented by Laura Femino, Tyce Walters and Edward Lyons. Wharton Business School’s team consisted of Hubert de Blignieres, Emma Wang and Nora Varela Cardenas. Next June, both clubs will fly to the Médoc region for the competition’s Grand Finale at Chateau Lafitte. 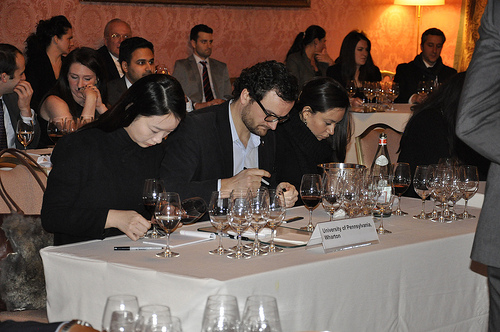 The “L.B.B.C.” (Left Bank Bordeaux Cup) was created in 2002 for French and British students, before it opened up in 2011 to international teams: from Asia, Central Europe and America.

The participating universities are:

Click here for the speech of Mr. Bertrand Lortholary, Consul General of France in New York

Watch the photos of the event