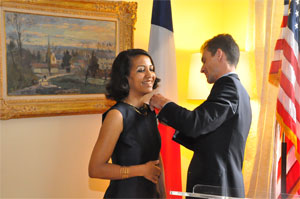 Mrs Olga Statz was presented with the insigna of Chevalier of the Legion of Honor by Consul General Philippe Lalliot at a ceremony held at the French Consulate General in New York on June 2, 2010.

To see the pictures of the ceremony, please visit the Flickr page of the Consulate.

It is traditional in France to trace the career path and—if possible—to extol the virtues of the person on whom a decoration is being bestowed, or who is being welcomed into the Académie des Sciences or des Belles Lettres, beginning with the Académie Française. Sometimes this gives rise to comical scenes in which the person who has to give the speech is practically choking while lavishing praise on someone he can’t stand.

That certainly is not the case today! On the contrary, it gives me special pleasure to follow in this tradition, before bestowing upon Olga the Insignia of Chevalier of the Legion of Honor.

Although I consider Olga a friend, I’ve known her for a much shorter time than most of you—for just a few months, as I was fortunate to meet her shortly after my arrival in New York. But I soon came to appreciate this brilliant lawyer and woman of conviction.

Olga is a very discreet person who hardly if ever talks about herself and places her profession and the causes she champions in the forefront. That characteristic, which is praiseworthy in itself, did not make my job any easier.

To prepare this speech, I needed some first-hand information and personal details. Since I couldn’t pry them out of Olga, I sought to speak with her father. I have to confess that I almost failed miserably. Here, as in many areas, Olga is her father’s daughter.

Seeing that I was becoming desperate, Jean—and I want to thank him for this—finally did agree to give me some precious information that would allow me to sketch a quick portrait. I apologized to him for being so indiscreet and he replied: “It doesn’t bother me if it’s for Olga.”

So the story began in Haiti, not that Olga was born there, but it is where she was conceived (as her father told me). Those were the nightmarish years of the Duvalier dictatorship. For Jean and his wife, both lawyers, the situation was untenable.

The judicial system was a travesty of justice. Attorneys were targets of the regime and their lives were threatened. So they made the difficult decision to go into exile. First they left for Canada, where they stayed only a short time before coming to the United States. They chose New York, which had the reputation of welcoming immigrants.

Still, things were very hard at first. To support his family, Jean had to work as many as three jobs. At one point, he worked as a janitor by day, as an orderly by night and at a carwash on Saturdays. When his daughter once asked him why he had worked so hard, he answered simply: “You needed food.” Jean, a cultured intellectual, says modestly of this period that he had to adapt.

Then one day, somewhat by chance, he came across a job announcement for a social worker for the City of New York. He would go on to care for the elderly until his retirement. His wife too worked for the Department of Health and Human Services. Madame, I want to tell you how happy I am to welcome you here today and to see that your recent health problems are hardly more than a bad memory.

I am going to skip forward, or we might be here for much of the night! Olga grew up. She was talented and, to quote her father, “not too unruly but still, a little bit unruly, and talked a lot at school”—already a future lawyer or teacher—a child who loved to read and who devoured the books her father bought her. I am also told that while Anna, Olga’s daughter, looks a lot like her father, she has the same love of reading, the same discipline at school, the same even temper.

With that kind of track record, it will come as no surprise that you passed the New York Bar on your first try. Right out of law school, you worked as an Assistant Corporation Counsel in the Law Department of the City of New York and were Deputy Director of Legal Outreach, Inc. a not-for-profit organization dedicated to teaching law to gifted young students in Harlem. You then established your own law office, focusing your practice on criminal defense, political asylum, and relief from deportation.

Since 2000, you have been an Adjunct Professor of Law at the prestigious Cardozo School of Law in New York. You teach Advanced Legal Writing and Common Law Practice to students at the Masters Level.

You are also the principal of a consulting business specializing in assisting Civil Law attorneys to write, speak and practice effectively in the common law system. But you didn’t give up the practice of law entirely and you occasionally litigate pro-bono. You have also written articles on various topics for the online journal Women’s Voices for Change and I’m told you are presently writing a book on American legal rhetoric.

This, in a nutshell, sums up Olga’s academic and professional career. That in itself would be enough to justify receiving this Legion of Honor. But there is much more.

You are all familiar with Olga’s commitment to charitable organizations and volunteer associations such as Amnesty International, the Samaritan’s Purse Association and the Bowery Mission Women’s Center. Olga works pro bono to help the most vulnerable: children in difficult situations and notably orphans and homeless women who need help reintegrating into society. This attention to others—notably the most fragile—is certainly the result of her upbringing and education, but it is also her way of putting into action her faith and its precepts, those of Catholicism, which we—and myself first of all—tend all too often to forget.

This faith, this enthusiasm, this determination to do everything possible to ensure the triumph of the causes you believe in—you have placed in the service of Saint Vincent de Paul for several years now.

It is true that this church embodies many of the values that you cherish. America’s first integrated church, Saint Vincent de Paul has welcomed blacks and whites equally since the late 19th century. Ever since it was established, it has been a place where the most destitute knew they could find aid, comfort and compassion. Finally, this church has been not just a French parish but a Francophone parish where the French of New York, as well as Africans, West Indians, including a large Haitian community come together.

You are a key figure in the efforts to keep this parish alive. I always admire the spirit, intelligence and self-effacement that you deploy in doing so. For this too, we are very grateful to you.

When I asked your father to tell me in just a few words about the qualities that describe you best, he said: she is honest, she is a perfectionist, she is devout. That is a father’s tribute to his daughter, a tribute that is much more eloquent and much truer than anything I’ve just said.