Home > The Consulate General of France > Decorations > May 8th Commemoration: 14 American Veterans and a Heroine of the Resistance (...)

May 8th Commemoration: 14 American Veterans and a Heroine of the Resistance Honored

Fourteen American veterans of World War II along with a heroine of the resistance were presented with the Insigna of the Legion of Honor by Consul General Philippe Lalliot at a ceremony at the French Consulate General in New York on May 8, 2010, marking the anniversary of the VE Day.

To see the pictures of the ceremony, please visit the Flickr page of the Consulate 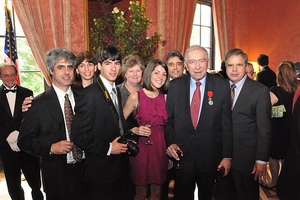 It is a great pleasure and a great honor for me to welcome you today to the Consulate General of France.

On this 8th of May which celebrates the victory over Nazi Germany, we have gathered to pay tribute to fifteen heroes whose courage and dedication contributed to the liberation of France and Europe 66 years ago.

My thoughts go out in particular to those who sacrificed their lives and I want to extend to them too, the solemn tribute of the French nation.

In his speech on June 6, 2009, at the commemoration marking the 65th anniversary of D-Day, President Sarkozy— standing before the 9,000 graves of the Colleville-sur-Mer Cemetery — reiterated France’s eternal debt to you.

As our President said, this war “was won by 20-year-old soldiers who killed so as not to be killed, who were afraid of dying but whom, far from home with an admirable courage, fought a ruthless enemy as if the fate of their own homeland was at stake.”

Today we want to thank the last survivors of that tragedy who are here with us today and through them, all those whose courage made it possible to vanquish one of the most barbarous regimes of all time. They fought for a cause that they knew deep down inside to be greater than their own lives.

More than half a century has gone by since the end of World War II but for France and in all of our hearts, the memory of your courage inspires eternal gratitude. It is our duty to cultivate this memory—the memory of all the American veterans who came to the aid of France and Europe. I want to tell you very simply, as a young man who did not experience that war: we will never forget.

France will never forget the Allied Landings on June 6, 1944 and the hell under the gunfire of the enemy’s. For many, these landings were but the entry point to other campaigns in Lorraine or in the Ardennes.

France will never forget the landings in Provence on August 15, 1944, which often followed already difficult operations in North Africa or Italy.

France will never forget either the engagement of those who fought with the resistance. Please allow me to salute today the courage of Mrs. Renée Wiener, who fled the Anschluss in 1938 and who did not hesitate to enter in “l’armée juive de Nice” the Jewish Army of Nice.

Madame, may you continue to be a model of courage to your grandchildren and our own, a force and inspiration to guide their path in the world of today and tomorrow.

Because our debt to you cannot be paid by remembrance alone. The example you set must also inspire us in the future. The best tribute we can pay you is to prove ourselves worthy of what you achieved for us.

That is, notably, to continue your fight, wherever freedom and the values and ideals which we hold dear are threatened. We must also nurture the friendship between our two countries and our two people, a friendship forged in adversity, in shared combat and spilled blood, a friendship that has never failed when the essential was at stake.

You were nominated by President Nicolas Sarkozy to receive the Insignia of the Legion of Honor—an order established to reward outstanding services rendered to France, on the basis of personal merit. Since it was founded by Napoleon Bonaparte in 1802, the Legion of Honor has been France’s highest award.

Lastly, I would like also to salute the memory of James Rooney, who should have been with us this morning. It is posthumously that I will honor him. His son, who is with us today, will receive the decoration in the name of President Sarkozy. May James Rooney’s soul rest in peace.

Before proceeding with the bestowal of the Insignia of the Legion of Honor, I invite you to listen to our national anthems./. 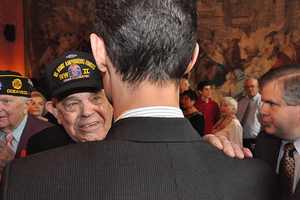