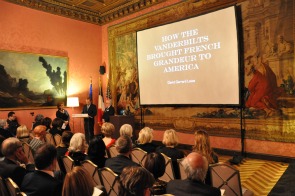 On Thursday, February 16, 2012, members of the French Heritage Society gathered at the Consulate General of France in New York for a reading given by Mr. David Garrard Lowe, President of the Alliance des Beaux-Arts, on the Vanderbilt family. The event was held in the presence mainly of the Deputy Consul General, Mr. Patrick Lachaussée, and of Mr. and Mrs. Montesquiou-Fézensac.

“The friendship that unites us appears on no genealogical tree… and has never been shattered,” recalled Mr. Patrick Lachaussée, speaking of the French Heritage Society in particular, and more generally of the “family we all make up together, the French-American family”.

Click here to see the pictures of the event.