Home > The Consulate General of France > Decorations > Mr. Dreyfuss was bestowed the Legion of Honor

Mr. Dreyfuss was bestowed the Legion of Honor

Mr. Stephen L. Dreyfuss was bestowed the insignia of Chevalier in the National Legion of Honor by M. François Delattre, Ambassador of France to the United States, on May 28th 2014. 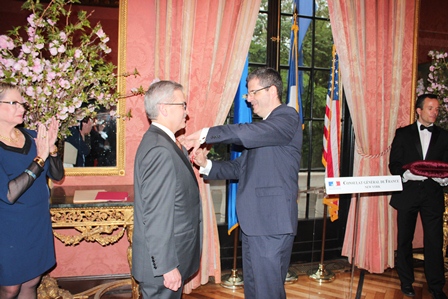 Mr. Dreyfuss is a partner at Hellring Lindeman Goldstein & Siegal LLP, a law firm based in Newark, New Jersey. For over thirty years, he’s been hailed as a renowned specialist in international litigation and transactions. A perfect French-speaker and a great connoisseur of our country, M. Dreyfuss was the most-fitting person to become Executive Vice-President and Legal Counsel of the French-American Chamber of Commerce. He’s already been awarded the National Order of Merit by the Government of France in 2003 for his contributions to French-American relations and is chairing the Union Internationale des Avocats, one of the oldest law firms of the world, since 2013, striving, as the UIA’s motto emphasizes, to “bring together the world’s lawyers”.