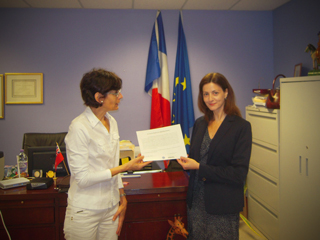 Ms Nicole Haziza took up her post as Honorary Consul of France in the Bermudas on December 4th, 2012, upon her nomination by Mr. Bertrand Lortholary, Consul General of France in New York. She succeeds Ms Riquette Bonne-Smith, who held the position from 2007 to 2012.

Ms Haziza’s consular office hours are every Thursday morning upon appointment only, at the following address: