On Saturday, March 10th 2018, L’Entraide Française, an association helping French people facing emotionnal or financial issues in the Tri-state area, organizes its annual fundraising concert at the Cultural Services of theFrench Embassy in the US, the "Spring Young Talent Concert". 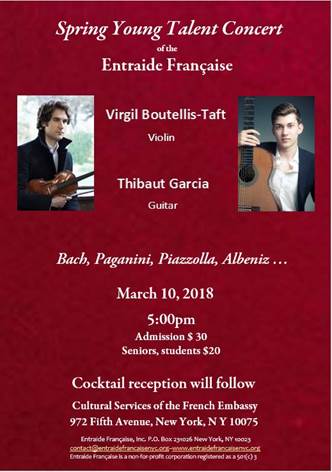 Come and enjoy some Bach, Piazzolla or Paganini performed by two young talents:

Thibaut Garcia, winner of the 2015 Guitar Foundation of America International Concert Artists Competition. Thibaut Garcia made his New York debut at the 92stY with the D’Addario foundation.Dubbed "The Little Prince of Classical Guitar" by the Classical Guitar magazine, he travels the world today, giving more than 80 concerts in 2017, in the United States, Canada, Mexico, Europe and Australia.

He is regularly invited to play with orchestras such as the BBC Symphony Orchestra, the Toulouse Capitol Orchestra, the Montpellier National Orchestra …He is now an exclusive artist at Warner Classics & Erato, where his latest album "Leyendas" around Spanish music was released in 2016. His next recording will be devoted to the great master Johann Sebastian Bach.