Home > Opening of the exhibition “Elysée Treaty at 50”

Opening of the exhibition “Elysée Treaty at 50” 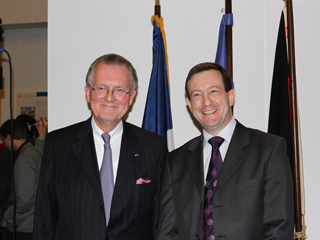 On Thursday, February 7th, the consuls general of France and Germany in New York have commemorated the fiftieth anniversary of the Elysée Treaty during the opening of the exhibition “Elysée Treaty at 50”. The Elysée Treaty was signed in 1963 by German Chancellor Konrad Adenauer and French President Charles de Gaulles and has been the foundation of French-German cooperation and partnership. Mr Bertrand Lortholary and Mr Busso von Alvensleben came back on the unique relationship linking our two peoples and have insisted on the importance of France and Germany as the driving force in the construction of the European Union. Our fellow French and German countrymen living in New York have had the opportunity to talk over a buffet celebrating our respective culinary traditions. The exhibition on the Elysée treaty will be open to the public at the German House until the end of February.

Speech given by Mr Bertrand Lortholary, Consul general of France in New York