Home > Events > Outside of the Consulate > Peter Turnley, war correspondent and photographer, presented his work in (...) 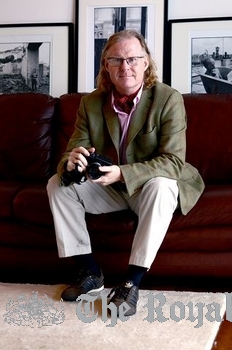 War correspondent and photographer Peter Turnley was presenting his works, past and present, on February, 28th in Hamilton, Bermuda. The conference was co-sponsored by Mrs. Nicole Haziza, Honorary Consul of France in Bermuda and the Bermuda National Gallery.

Turnley notably introduced his last book, A love letter to Paris: 40 years of photography. He also spoke extensively about his work on armed conflicts around the world. Indeed, Turnley covered many wars, such as the Kosovo War or the First Gulf War.

Having acquired worldwide recognition for his journalistic and artistic production throughout years, Turnley had pictures appearing on cover of magazines such as Newsweek or LIFE Magazine.

More on the conference and on Turnley: