Conference@934: PlaNet Finance US’ Fundraising Gala and discussion with Jacques Attali on April 14th at the Consulate 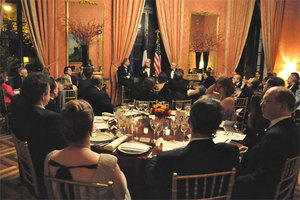 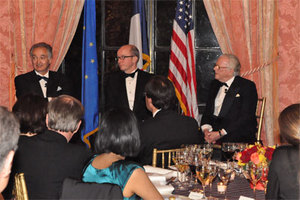 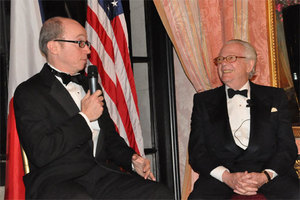 During the evening, PlaNet Finance’s Founder and President Mr. Jacques Attali debated the financial crisis exit and the economic perspectives with Mr. Michel David-Weill, Chairman of Eurazeo’s Supervisory Board.

This fundraising event will help PlaNet Finance US develop programs and find innovative solutions to fight poverty. This event is key to the pursuit and growth of PlaNet Finance in the US in 2010 and beyond.

To see more pictures, please visit the Flickr page of the Consulate.

I’m very happy to welcome you to the Consulate General of France for this reception dedicated to PlaNet Finance, an organization whose innovative spirit and dynamism I admire. Its code of ethics states well its purpose and its profound originality: “contributing to the improvement of human dignity,” the fight against poverty and the development of democracy, as well as finance in service of solidarity.

In a few minutes, Frédéric Samama will present at length the activities and the projects of PlaNet Finance along with our three guests. But, I would like nonetheless to say a few words to tell you what a pleasure it is to welcome them today.

Jacques Attali is a personality that is, to tell the truth, a bit… frightening. How in fact can one man by himself bring together so much talent? Author, essayist, playwright and even a children’s book author, hence a man of letters but also a man of action, at the crossroads of economics, politics and humanitarian action. You must admit with me that it’s pretty hopeless for the rest of us!

My first memory of Jacques Attali goes back to 1981 and the election of François Mitterrand. It was the time when certain Americans worried about the entry of communist ministers into the French government, the same as certain French, who as a sign of protest turned their television screens to face the wall! Jacques Attali remained a Counsellor to President Mitterrand for nearly ten years; a Counsellor very much listened to, very much courted and very much dreaded. President Sarkozy for his part, named him to the head of a commission in charge of reflecting on the ways to ease restrictions on growth in France and more recently he put him in charge of making recommendations for an exit strategy from the economic crisis. It would be indeed criminal to do without the advice of a man such as Jacques Attali!

A few weeks ago, Frédéric Samama told me that we would have Michel David-Weill at Jacques Attali’s side. I told myself that it was Christmas in April! Banker at the head of the prestigious bank Lazard, great collector and art connoisseur, thus following a long family tradition, philanthropist, even if his legendary discretion leads him to never say too much about it. In a word and like Jacques Attali, an “honest man,” in the sense that it had in the 18th century. I’m all the more happy to welcome you here tonight, Sir, as you are almost as American as French, being notably an alumnus of the Lycée français de New York.

Last but not least, Alan Murray, talented journalist, formerly for CNBC, currently at the Wall Street Journal, which we all know well for its traditionally pro-French positions, recipient of numerous prizes for his analyses in both economics and politics. It required a big name such as him to measure up to Jacques Attali and Michel David-Weill.

You understand that it’s an honour for me to host these three key figures. It’s now up to Frédéric Samama to introduce them more formally. Speaking of an introduction, I’m reminded of a story. Told he didn’t need any introduction, Henry Kissinger replied: “You know, I suppose it’s true. I don’t need an introduction. But I like a good one. ”

Frédéric, it’s up to you. I’m sure with much more verve than me. The floor is yours.