Recipe of the month: Pear Rissoles

The recipe’s origins lie in the Thônes valley where rissoles were traditionally made at Christmas time. The name for these pear turnovers comes from the French verb rissoler, which means “to brown,” and which in turn is derived from the Latin word russeolus, meaning “reddish.” Called rézules in the Savoyard dialect, they are considered a specialty of Savoy.

Every housewife had her own way of making rissoles. They were prepared several days before Christmas, and kept uncooked and cold on boards. They were then baked in small batches, to be served warm to guests.

Frequently, rissoles are made at the end of autumn with the pears of that season such as Blesson or Marlioz, often referred to simply as “rissole pears.” These pears are distinctive for having hard flesh that is edible only when cooked, and which then turns red.

The pears are cooked down with sugar and spices to make a compote. To give the rissoles a nice color and shine, the pastry is brushed with an egg wash. You can finish them off with a dusting of powdered sugar before serving. {} 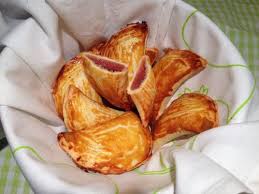 1. Preheat the oven to 425-445°F. 2. Pare and quarter the pears. 3. In a heavy-bottomed pot, place the pear, dried apricots, raisins, spices, butter and sugar and a little bit of water. Cook on low heat until the pear pieces break down and all the liquid evaporates, about 2 hours if you are using Blesson pears, less for soft pears. Set aside to cool completely. 4. Prepare an egg wash by whisking the egg yolk with 1 tsp water. 5. Lay the premade puff pastry on a lightly floured work surface. If the pastry dough is thicker than ⅕ inch, you will need to roll it out. Cut out rectangles measuring 4 inches by 2 inches. 6. For each rectangle, brush the edges with the egg wash. 7. Spoon the pear compote at the bottom of the rectangle. Fold over to close and press the edges to seal. 8. Brush the top of the rissole with the egg wash. Repeat for all remaining rectangles. 9. Bake at 425-445°F for 10 minutes, then lower the oven temperature to 350°F and continue baking until crispy and golden. {} {}

If you have any questions or comments, send me an email at chef.consulat@icloud.com