Recipe of the Month: Tartiflette

This is another recipe from the Auvergne-Rhône-Alpes region, but from the lower altitudes of Savoie and Haute-Savoie. Savoyard and Haute-Savoyard cooking feature simple, hearty dishes that stand out with ingredients infused with the special flavors and scents of the plains and mountains.

Savoyard cuisine has been influenced by the Italians, resulting in two types of local pasta (crozet and taillerin) and the use of polenta. Potatoes, Savoyard cheeses and meats (such as diot, a type of sausage) are essential to popular dishes found on every table in the region.

Tartiflette, a dish of sliced potatoes and lardons baked in the oven with cheese, is one that has universal qualities and is very simple to make. It is particularly well suited to current temperatures and children always seem to love it.

Our recipe calls specifically for Reblochon. Created in the 13th century in the town of Thônes, Reblochon is made from milk from cows grazing in the surrounding Aravis massif.

There are two theories to the origins to the name given to Reblochon. Either it takes its name from the Savoyard word "re-blocher" which, in the 16th century, meant to "milk a second time." Or it takes its name from a word from the same period, "reblasse," which designated the practice of local farmers who would milk the abbey’s cows for the monks and then surreptitiously milk the abbey’s cows for themselves. 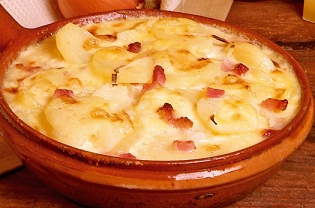 I’d like to end this recipe with a quote from Theodore Zeldin, and wish you all a bon appétit. Until next time!

If you have any questions or comments, send me an email at chef.consulat@icloud.com.