Recipe of the month : The Kouglof

Before leaving Alsace for new culinary adventures, we needed one last recipe. Indeed, this French region, with its rich gastronomic legacy and fascinating stories, is a constant reminder of the importance of our heritage in our culinary memory, and many of you requested it. So, we just had to bid Alsace goodbye with the recipe of the kougelhof – kouglouf (in Alsatian, Haut-Rhin region).

{} {} According to some sources, the word Kouglof comes from the word Kugelhut (kugel meaning ball, and hut, hat), which used to refer to the hat of Strasbourg’s parliament members.

In fact, the history of the Kouglof is very uncertain, as it was rarely mentioned in writing before the 19th century. It was proved, however, that the Kougelhopg already existed in the 18th century, as the oldest pans that were found date from that time. Legend has it that this pastry was first prepared by the Three Kings, to thank a local pastry chef from the town of Ribeauvillé, named Kugel, for his hospitality, and that the Kouglof mimics the shape of the Kings’ turbans.

It has also been said that the Alsatian brioche originated in Bethlehem. One of the Kings is said to have forgotten his hat, an almond-shaped turban made out of gold and diamonds, at the site of the Nativity. Upon his return from the crusades, a pastry chef from Strasbourg who had found the hat, used it as a cake pan. According to this version, the “Kugelhopf”, which means “turban” in Alsatian, was born.

It has also been said that the Kouglof is the father of another iconic French pastry, the « baba au rhum ». Stanislas Leczynski (1677-1766), king of Poland and father-in-law of Louis the 15th, had set up court in Lunéville, a town in the Lorraine region. He found the local kouglof a little dry, so his pastry cook dipped it in a syrup made of rum and sugar.

The kouglof pan can be made of copper, but it is generally made out of enameled terracotta, coming from the Soufflenheim pottery. Its shape enables an even heat distribution through the center of the dough.

According to the Unterlinden museum, the copper sheet is shaped by hand, without any welding. The ornate miniature molds, as well as regular molds, all had suspension rings and were hooked in kitchen by housewives, as a way of showcasing the household’s affluence and high cooking standards. It has also been said that copper pans, or their terracotta equivalents, were sometimes offered as wedding gifts, and were considered lucky charms supposed to favor good childbirth outcomes. {} 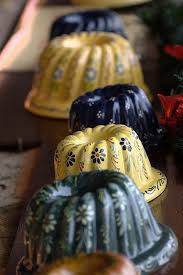 Warm up the milk (it should be lukewarm) and dissolve the yeast in the milk. Sift the flour. Using the hook attachment of your stand mixer, mix the flour, salt and sugar at medium speed. Add the milk and yeast mixture while keeping the mixer running. Add eggs, one by one, and keep the mixer running at medium speed once all the eggs have been incorporated. At high speed, keep mixing until the dough forms a ball and detaches from the sides of the bowl. Add the softened butter slowly, and reserve the dough, close to a source of heat, for an hour. After an hour, fold the dough inside the bowl.

Soaking the raisins and making the syrup

Warm up the water (it should be lukewarm), then add the rum and raisins and soak for 30 minutes, to let the raisins soften. This is to prevent the raisins from dropping to the bottom of the pan. Drain and reserve the raisins. Put the water, sugar, citrus zest and vanilla pod in a saucepan. Bring to a boil and add rum to taste – remove pan from the burner to do this.

Grease the kouglof pan with the softened butter. In the bowl of the mixer, add the drained raisins to the risen dough and mix at low speed until well incorporated. Layer the almonds at the bottom of the kouglof pan and pour the dough, filling ¾ of the pan. Let the dough sit until it reaches the top of the pan, then glaze with egg yolk, using a pastry brush. Put in the oven, preheated to 180°C (360°F), for 30 minutes (cooking time varies depending of the size of the pan).

Take the kouglof out of the oven, remove it from the pan and let it cool on a rack. Glaze it with the prepared syrup. Set on a plate and sprinkle confectioner’s sugar. {} {} On these words by Yves Courrière, I wish you a Bon Appétit !.

{} If you have any questions or comments, send me an email at chef.consulat@icloud.com {} {}

{} {} {} Chef de cuisine {} For more amazing recipes, you can read our "Recipe of the month" section