Recipe of the month : The quiche Lorraine

Our chef Sebastien Baud shares once again one of his favourite recipe. This month, we continue our Grand Tour in North East France to make a stop in Lorraine, known for the battlefields of Verdun and the Place Stanislas in beautiful Nancy. You might have guessed it : this month’s recipe is the quiche Lorraine. Bon appétit !

I am delighted to be with you again as the summer comes to an end, and to share a new culinary adventure. Before we start, I hope you all had a wonderful summer full of discoveries, tastings, memories and maybe new recipes to share with your friends and family.

When we left last month we were in Alsace, today we find ourselves in neighboring Lorraine

The recipe I am sharing today, of course, is the quiche Lorraine, a world-famous dish which is loved by everyone, big or small. The region of glass and crystal, Lorraine is a melting pot of Roman and Germanic cultures, as reflected by the Place Stanislas in Nancy, which is part of the Unesco World Heritage list. The area is also a highly historic one, with Verdun and the World War II “Maginot Line”, which cuts across the entire region. Lorraine is the country of “Mirabelle” plums, as well as cathedrals and basilicas which are world-renowned for their architecture.

The modern version of the quiche Lorraine is much thicker than the original, and dates back to the 19th century. As part of this evolution, the quiche has become an appetizer, while originally, in the country, appetizers were rarely served. The quiche was a quick dish, reserved for days when the housekeeper had to bake bread and was short on time.

The main difference with the current version of the dish lies in the composition and thickness of the dough. For centuries, it was a thin bread dough, scraped together with daily ingredients that were always on hand, i.e. beaten eggs with cream and thin slices of butter. In the Spring, this batter was occasionally enhanced by fresh onion from the garden, and was called the “migaine” in the regional dialect. The real quiche was different from this migaine, which varied greatly from region to region, particularly between the German-speaking northern part of Lorraine, and its Romanic counterpart in the south.

The slow transformation of this galette into the contemporary quiche which uses a short pastry, or sometimes even a puff pastry, for a thicker and richer rendition, explains why it has become impossible for Lorraine natives to confuse the quiche and the original migaine.

In the 19th century, when Charles Charton wrote Les Vosges pittoresques et historiques, he was outraged that the galette from Remiremont was “ignominiously called quiche”, which makes us think that for Southern Lorraine natives of the time, a quiche was a quick tart made at the last minute with dough scrapings, and in fact a simple “migaine”. We can see also that good galettes were supposed to be made by bakers, while the “quiche” was a simple family meal. Today, if you order a galette from a Lorraine hostess, you will not be served a quiche. 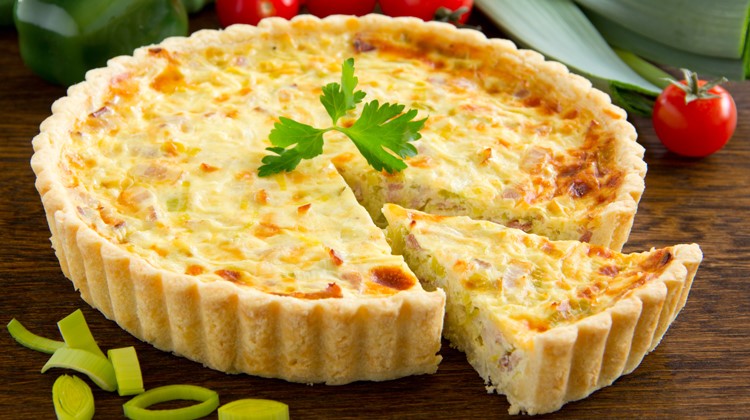 Recipe for 6 to 8 people

For the short pastry

• 250 grams cubed bacon • 150 grams Emmental cheese (note : the true quiche Lorraine does not include Emmental, but it is so good with it !)

Instructions for the short pastry

Place the chunks of butter and the salt on top of the flour. Mix the butter and flour together with your fingers, until it reaches a sand-like, powdery consistency. Add the egg yolk and the water, and form a ball. Knead the dough, pressing on the sides with the palm of your hand. Repeat 2-3 times. Form a ball again and set aside in the refrigerator for at least 2 hours

Instructions for the filling

Blanch the cubes of bacon in boiling water for 1 minute, and drain. In a non-stick, ungreased pan, cook the bacon for five minutes on medium heat, and drain on paper towels to remove the excess of fat.

Instructions for the batter

In a mixing bowl, beat the eggs with the cream, the milk, the nutmeg, salt and pepper.

Butter your tart pan if necessary, roll out the dough and place it in the pan. Place the bacon and Emmental at the bottom, and delicately fill in with the batter. Bake in the oven, pre-heated to 350°F, for 40 minutes.


The following quote gives us an idea of how quiches and tarts were associated with baking bread, here on the occasion of a wedding. One can sense how important celebrations were for Lorraine families, who did not eat white bread on a daily basis.

"The wedding was set for tomorrow. Baking bread and cooking cakes were the highest priority. For this exceptional occasion, white bread replaced rye or meslin loaves. On the counters and tables, housewives lined up an array of pastries, pates, brioches, quiches, tarts and cookies.”

If you have any questions or comments, send me an email at chef.consulat@icloud.com For more amazing recipes, you can read our "Recipe of the month" section