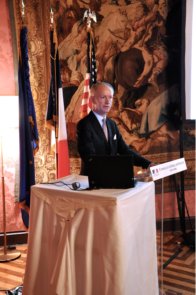 On Wednesday May 2nd, 2012, the World Monuments Fund presented its restoration project for the painted interior décor of the Chancellerie d’Orléans, at the Consulate General of France, and in presence of the World Monuments Fund Europe’s President, Mr. Bertrand du Vignaud, as well as that of the Consul General of France in New York, Mr. Philippe Lalliot.

The Chancellerie d’Orléans was an 18th century Parisian mansion constructed and decorated with the participation of Fragonard and the architect Charles de Wailly. Thanks to the World Monuments Fund, its painted décor – a real master-piece of its kind – will be fully restored and installed at the Rohan mansion in the city of Strasbourg, thus giving the public access to its marvels.