In the occasion of the release of the book "Planet UN" a screening of the documentary "Planet UN" by Romuald Sciora was organized on Thursday, March 4th,at the Consulate,

The screening was followed by a debate between His Excellency Gérard Araud, French Ambassador to the UN and the director Romuald Sciora, moderated by James Traub from New York Times. 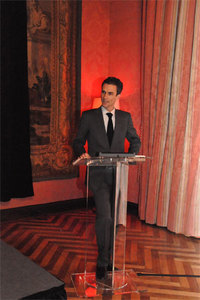 I would like to welcome you tonight to the Consulate of France for this projection of Romuald Sciora’s film “Planet UN.”

As you may already know, this documentary is the continuation of a first series entitled “At the Glass Building” that retraces the history of the United Nations through interviews with the successive Secretary Generals of the UN. The film which you will see is a reflection on the United Nations today and the challenges we face in the years to come. It is in a way the second part of a diptych.

Romuald will tell us about the genesis of this documentary, which is surely the most complete of any ever made on the United Nations. I believe that it took five years of work, investigation and interviews to complete. It is at the same time a reflection on the major issues of the 21st Century, notably peace keeping, development and human rights as it is a reflection on the role of the United Nations, an organization that is much criticized but so much needed.

For those of you who would like to pursue this reflection, I remind you that Romuald is also the author of this book, recently translated in to English, which I recommend that you read.

Following the projection of the film there will be a debate between Gérard Araud, Romuald Sciora and James Traub. I’m very proud that all three have accepted to be with us tonight. I thank them for it.

None of them of course need to be introduced but I must justify my presence here and my salary!

Gérard Araud is one of our most outstanding diplomats, Permanent Representative of France to the United Nations since last September, former Political Director at the French Ministry of Foreign Affairs, former Ambassador of France to Israel, amongst other prestigious titles and positions.

You all also know James Traub, journalist for the New York Times and a fine connoisseur of the mysteries of the UN. Amid several publications, he is the author of a reference book on Kofi Annan, the former Secretary General of the United Nations.

Romuald Sciora has directed a dozen political documentaries. He is also the author of a book on the Middle East and two plays. He is the founder and director of the NGO United Media.

Without further ado, I turn the floor over to Romuald.

I hope that everyone enjoys the film and the evening.