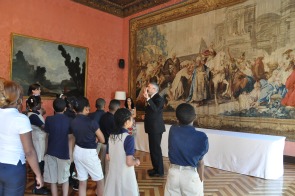 Thursday June 2nd, students of the Harlem Academy visited the Consulate General of France and received an overview of its history, heritage, functions and missions. After an exposé at the “Chapelle Salon” about the relations between France and Harlem, New York and the United States, the students learned about the secrets of the “Pink Salon”, and were able to admire its magnificent tapestry from the French Gobelins manufactory as well as its majestic chandelier, before tasting of a few chouquettes – the delicious French donut holes!