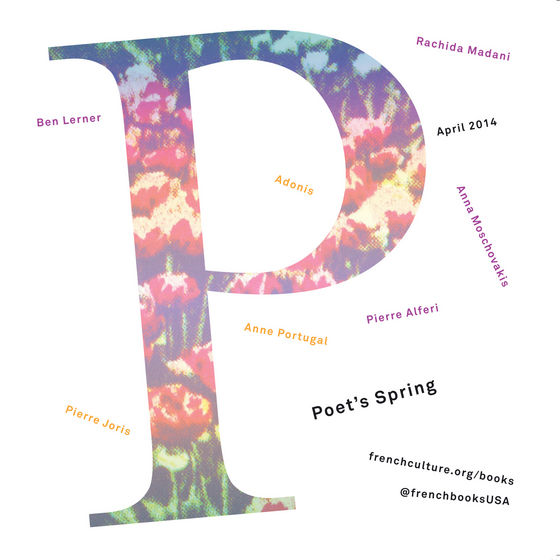 The Cultural Services of the French Embassy presents an eclectic series of engaging events in New York in April, featuring prominent Francophone and Anglophone poets such as Rachida Madani, Pierre Alferi, Anne Portugal, Adonis, Pierre Joris, Ben Lerner, and Anna Moschovakis. With an insatiable appetite for word play, American poets and French poètes come together to open up a broad reflection on poetic writing and to embark on a discussion of the role of poetry in the often-converging worlds of literature and politics.

Multicultural events will take place at Silvana, the Poets House, McNally Jackson Books, New York University, the Public Theater, and other acclaimed venues, to unveil the complex and innovative nature of poetry. Poet’s Spring incorporates readings, a round table discussion, a master class, live music, political discourse, and illustration, and is inspired by the simultaneously occurring Printemps des poètes festival in France.

Highlights include a reading by Rachida Madani of her Tales of a Severed Head, paired with a traditional Moroccan music performance by Gnawa Boussou, a discussion with poets Pierre Alferi, Anne Portugal, Ben Lerner and Anna Moschovakis accompanying illustrations by students from School of Visual Arts and a show by the musician Charlie Burnham and a rare Master Class with Syrian author Adonis in conversation with celebrated American poet Jorie Graham at The Public Theater.

The 2014 PEN World Voices Festival will then kick off in collaboration with Poet’s Spring with an event in which 12 prominent thinkers will bring their rage to the stage for 7-minute orations.

All infos and different events: frenchculture.org